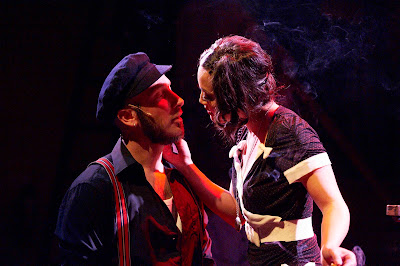 The Lorelei, the siren who lured Rhine shipmen onto the rocks with her song, returns as a cabaret singer who entrances a wandering sailor in this pastiche of songs, some of ports and the sea, by Mark Storen and Chris Bendall, who also directs.
Storen plays Buzzard, the lonely sailor, enchanted by the vamp Lorelei (Rhoda Lopez) and led by her across the seven seas to ports from here to New York City.
Let’s start at the top. Fiona Bruce has delivered a winning design for the show, with cabaret tables dotting the floor and stages surrounding the audience. It’s fun to be in and great to look at as the two performers bob up around and among you. Lopez starts in spectacular form, with Jacques Brel’s Amsterdam, and is shipshape and sexy throughout. Storen’s powerful and somewhat threatening aura makes his capsize from someone who might do anything to Lorelei into someone who would do anything for her even more effective.
Many of the early songs (the piece is ostensibly set in the 1930s but takes music from the Gershwins to Nick Cave) are given full treatment and work terrifically well. You know the storyline is patchy and opportunistic, but the setting, the music (musical director Tim Cunniffe and the omnipresent Joe Lui accompany) and the performances made that of little consequence.
Well, up to a point. As things progressed, and especially after interval, the show hits a reef. The story becomes lurid and frenetic and, worse, the songs become snippets and weird little juxtapositions with little meaning or cogency. Here’s a bit of The Ship Song, there’s a snatch of Witchcraft. The low point for me was when Storen emerged with acoustic guitar and launched into Bob Dylan’s Desolation Row. What it had to do with the increasingly murky story of Lorelei and Buzzard I have no idea, but it sounded fantastic, moody, touching and insinuating. So when it stopped after the first two verses (of Dylan’s eleven verse masterpiece) and the show steamed off to another port, I’m afraid I jumped ship.
That said, I hope Deckchair use the hall in cabaret again and often. On the strength of Lorelei, and despite its weaknesses, they’ve got the venue and the people to make a popular and artistic success of it.
That's just one opinion: link here to Steve Bevis's review in The West Australian
Posted by David Zampatti at 4:06 PM