Theatre: Blood Will Have Blood


Directed by John Sheedy
Set and costume designer Daniel Ampuero
Performed by WAAPA 3rd Year Acting students Ben O’Toole, Lara Schwerdt, Griffin Blumer, Ryan Jones, Jessica Clarke, Kali Hulme, Joshua Brennan, Emma Chelsey, Michael Drysdale, Charlotte Hazzard, Philippe Klaus, Nicole Shostak, Nic Westaway, Alex Williams and Gemma Willing
Subiaco Arts Centre
October 22 - 27, 2011
WAAPA’s class of 2011 have topped off their training with a wild ride through Shakespeare at the Subiaco Arts Centre in Blood Will Have Blood. While it didn't work at all for me as a piece of cogent theatre, the imagination of the guest director, Barking Gecko’s John Sheedy, and the talented student designer Daniel Ampuero deliver a fascinating exercise for these dazzling young things, and a glimpse of what they will become.
Read more »
Posted by David Zampatti at 11:53 AM No comments:

The Wet Weather Ensemble
Devised by Ian Sinclair, Moya Thomas and the cast 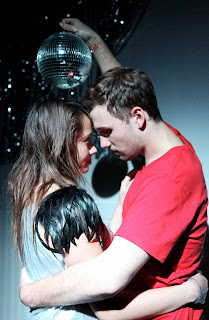 This Adam and Eve is an exhilarating account of man’s first disobedience, the fruit of a forbidden tree and the loss of Eden. A modern re-telling of The Fall could easily descend into mere parody or undergraduate piffle, but in the hands of director Moya Thomas and a cracking quartet of young actors, there’s not the slightest risk of that happening.
The hilariously droll St John Cowcher sets the tone in best Hugh Laurie (pre-House) style, and from then on it’s a whacky rollercoaster ride of cultural references and theatrical tomfoolery. Along the way the lost and lonely Adam (Ian Sinclair) meets his heavenly Eve (Moana Lutton) out the back of a club called Eden, and it’s love, and the fate of mankind, at first glance. It’s as if there’s no-one but them in the world.
Read more »
Posted by David Zampatti at 10:11 AM No comments:

Written and directed by Jessica Craig-Piper
With Lawrence Ashford, Zoe Cooper and Kathryn Delaney
The Blue Room Theatre
October 5 - 22, 2011
I’ve been looking forward to the next outing by Jessica Craig-Piper and the Red Rabbit Collective since their Jack and Jill also at the Blue Room last year. While their new work, which comes here fresh from a run at the Edinburgh Fringe, confirms that promise, it’s a disappointment in a number of ways.
Flirt Fiction steps away from the domestic drama of Jack and Jill in favour of a more artificial structure and mannered approach. There’s nothing wrong with that, but it’s a pity they chose, on this occasion at least, not to continue to bring the perspective of young artists to real life as it is lived by their generation.
Read more »
Posted by David Zampatti at 10:05 AM No comments:

The irony of Black Swan's second season at the State Theatre Centre is that economics appears to have forced it into the complex's big upstairs room, the Heath Ledger Theatre, for all six of the works it is mounting in 2012. From what I can gather, the STC's other resident, the Perth Theatre Company, is also grappling with the financial equation of using the smaller Studio Underground space in the complex.
It's ironic because Black Swan demonstrated this year that it has the pulling power to fill the Heath Ledger and you'd have thought that, flush with burgeoning box office revenues, increased corporate support, some high profile private generosity and the lion's share of government funding  for theatre in Western Australia, it would be able to turn its enviable position into more of the edgy product – the current season of The Damned is a case in point – you assume the Studio was built to house.
That it appears not to be able to make the sums work for the Studio suggests the economic settings are fatally wrong for the space. If Black Swan can't make it work, you'd have to wonder who can.
Having said that, I think it's fair to say the season of six plays the company's artistic director Kate Cherry (who directs three of them) unveiled last night – in the Studio of all places – focus more tightly than last year on the company's brief as the State theatre company, with two new works on West Australian themes, two other new Australian plays and two established works from the last couple of decades by a British and an American writer.
Read more »
Posted by David Zampatti at 9:31 AM No comments:

Black Swan State Theatre Company
Directed by Andrew Lewis
Featuring Sage Douglas, Amanda Woodhams, Claire Lovering, Wade Briggs, Greg McNeill and Polly Low
Designed by Alicia Clements
The Studio Underground, State Theatre Centre
October 14 - 30, 2011
In a small town called Rainbow, where The Damned sets its scene, a pair of star-crossed lovers take a life.
Based in part on several tragedies across regional Australia, Reg Cribb’s sad story is about the isolation and alienation of young people in small towns, the damage it does them and that they do. It's a difficult tale to tell, and watch, but it succeeds against the odds because Cribb maintains a firm hold on the narrative and director Andrew Lewis has drawn fine performances from the young actors playing its central characters.
Kylie (Sage Douglas) was bound to meet Natasha (Amanda Woodhams) at Rainbow’s ramshackle high school, and just as certain to fall under her spell. Natasha is a Fury, contemptuous of everything and everybody about her, and she is bad medicine for the sad, impressionable Kylie.
Read more »
Posted by David Zampatti at 12:43 PM No comments:

Doris Day – So Much More than the Girl Next Door 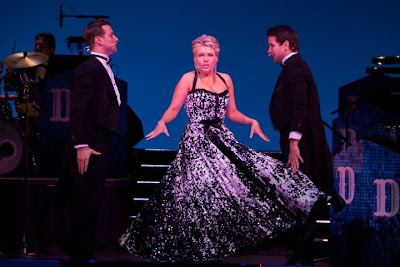 It’s interesting to see how far the tribute show has gone since someone first slipped on a sequined pantsuit and purported to be Elvis.
It’s even developed sub-niches, from the one-act cover bands, witness the multitudes of ABBAs, Queens, AC/DCs and Led Zeppelins plying their riffs around the globe, to the bio-tribute shows, the Lennons, Dustys and Orbisons that have sprouted up – most often from beyond the grave ­– and hit the world’s stages. There’s even, I believe, a three-day festival in Singapore with only tribute acts on its bill.
Melinda Schneider’s homage to Doris Day at the Regal is a little different. First, the object of her affection is still alive, 87-years-old and surrounded by her dogs, in leafy Carmel, California. Second, Schneider doesn’t actually purport to be Miss Day; she’s Ms Schneider throughout, weaving – with varying levels of success – her own story with that of her idol. And third, despite the aforementioned reservation, this is a genuinely felt and stylishly delivered example of its type that in some part at least transcends its genre.
Link here to the complete review in The West Australian

Posted by David Zampatti at 12:26 PM No comments:

By W.S. Gilbert and Arthur Sullivan

Those artists who can engage our high, middle and low brows simultaneously are rare beasts, and their appeal endures. Shakespeare had that gift. The Beatles did too. So did the librettist, W.S. Gilbert, and composer, Arthur Sullivan, who dominated the popular theatre on both sides of the Atlantic and paved the way for the modern musical. As the lyricist, Johnny Mercer, said, “We all come from Gilbert”.
Proof of the continuing popularity of their operettas is the Gilbert & Sullivan Society of WA, which has revived at least one of them each year for a remarkable six decades since 1951.
Link here to the complete review in The West Australian

Posted by David Zampatti at 12:04 PM No comments:

Email ThisBlogThis!Share to TwitterShare to FacebookShare to Pinterest
Labels: Gilbert and Sullivan, The Gondoliers 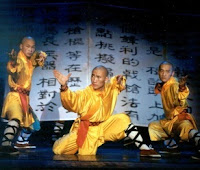 There’s been a monastery at Shaolin since the 5th Century AD, and records of the monks in combat date from the 7th Century. By the 16th Century, kung fu was an integral and famous part of Shaolin monastic life, exported throughout China and into Japan, Korea and Okinawa.
Shaolin kung fu has become a secular phenomena up there with the Cirque du Soleil franchise, the Blue Men and the various Celtic hoofers and Dutch fiddlers of present renown.
These performers, most from poor rural communities in Shandong and Henan provinces, may not be monks, but they are brought up and live like them, spending long days from very early ages training and mastering their art. Indeed, this production’s story of a boy’s journey from initiation to full warrior status features two lads who couldn’t be more than eleven or twelve but could only have achieved their staggering strength and supple skill after many years of training.

Posted by David Zampatti at 1:57 PM No comments: 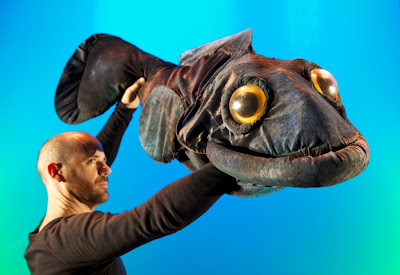 Tim Winton’s Blueback is the story of three generations of the Jackson family, their home on the mythical Longboat Bay, its waters, reefs and the giant groper Abel Jackson befriends as a child.
Our unofficial state laureate is in very familiar waters here, and his short novel is given a sweet, emotional adaptation and supple, inventive staging by playwright Peta Murray and the Terrapin Puppet Theatre at Spare Parts in Fremantle.
I couldn’t imagine a better school holiday treat than a visit to the Maritime Museum, fish and chips down at the fishing boat harbour and a performance of this charming and insightful production.
Link here to the complete review in The West Australian
Posted by David Zampatti at 10:46 AM No comments: