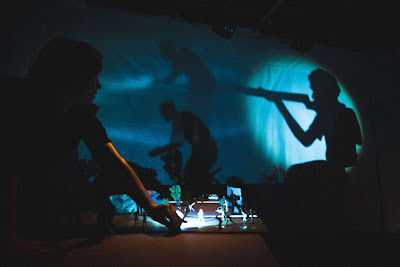 Tale of Tales is a small, brilliant gem of storytelling, and a breakout achievement for its deviser and performer, Clare Testoni.


Testoni’s previous work, including The Beast and the Bride and West of the Moon, has explored her interest in fairy tales, but any concern that her imagination and talents are confined to and by them is quickly dispelled in Tale of Tales.
She uses the fairy tales collected by Giambattista Basile in the 17th century (which include the earliest known versions of Rapunzel and Cinderella) as a jumping off point for a wider and deeper story of four generations of her own family, the rise of Fascism in Italy and the resistance to it, the flight of many Italians to Australia and their fate here.
It’s a passionate statement against fear and prejudice, and especially the practice of interment that is often its consequence. The parallels to the same practices in our own times are clearly and powerfully made.
It’s also the true love story of her great-grandparents, Sante and Antoinetta, and their strange, sad parting and estrangement. Their story is paired with Basile’s The Princess Who Couldn’t Laugh or Cry, The Crystal Tunnel, The Dragon and the Flea and others. The narrative technique give Basile’s stories new life and meaning – it’s a lesson in the purpose and power of fairy tales as well as a wonderful device for the telling of her own story.
Testoni is a shadow puppeteer, and she takes her craft to a new level. Working alongside the excellent actor Paul Grabovac, shining torches on tiny cutout figures on tables, she throws silhouettes of people and places – villages and cities, internment camps – onto the white-papered walls of the stage.
The images have a magical three-dimensionality, and move with an almost cinematic quality. They are interspersed with family photos and archival material, some very shocking, of Mussolini’s Italy and internment camps.
Tale of Tales is an honest show, and a heartfelt one; as Basile says in The Sun, the Moon and Talia, “a story left untold is destined to repeat itself.”
It’s a good thing, then, that Clare Testoni has told hers – and that she’s done it so very well.

This review has been archived by The Press Reader (link here)