As the name suggests, La Cucina dell’Arte takes place in a restaurant, in this case a pizzeria where the chef (David) battles it out with his ditzy assistant (Danny).
There was much breaking of plates and cocking of snooks in the set-up, but things came to a head when the two boys chose different women from the audience to be their guest for dinner on stage.
Things start flying about, and, in the process, Danny shows his considerable talent at plate-spinning, balancing, a bit of juggling and, especially, the wild and wonderful things you can do with pizza dough.
After a cute, albeit predictable, denouement, and a gracious rapprochement between performers and audience members, we filed back out into the dragon-infested night.
That’s all good, as far as it goes, but even at a smart 70 minutes, the show felt a little long, and, while Danny’s routines were skilful and funny, there just wasn’t enough of them, and a bit too much incidental business.
Just down the other end of James Street there are other tents, and inside them there are performers with history and a venerable performance tradition of their own, and they are going hell-for-leather to entertain at half the ticket price.
It’s shaping up to be a long, hot summer in Perth.

Link here to the complete review in The West Australian.

Posted by David Zampatti at 1:05 PM No comments:

Theatre: Duck, Death and the Tulip 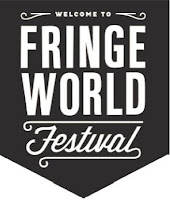 Emily Andersen
The Cheeky Sparrow
For Fringe World
Until Feb 13

Emily Andersen is an unprepossessing, 30-something Melbourne girl who’s affection for Britpop, Britain and a boy therefrom got her in and out of love and marriage a few years back.
She’s also a poet, and her witty and touching autobiographical verse play, Love in the Key of Britpop, is the product of that time, that romance and that affection.
Don’t be off put by the verse. Many playwrights, one from the 15th century in particular, have employed it with great success. Anyone who saw last year’s Fringe standout, Neil Watkins’ The Year of Magical Wanking, will remember how brilliantly the form can be used in a contemporary setting. Andersen has achieved a similar success this time around.
Britpop, for those unfamiliar with its specifics, was the genre of alternative rock music led by bands like Oasis, Blur and Pulp that reached its zenith in the mid-1990s. Ten years later, our Emily, still a fan, hangs out in indie clubs around Melbourne to drink, dance and cavort. It’s there she meets a British backpacker, and it’s casual sex at first sight. Love, anchored by their shared passion for the music, follows soon after, and marriage, necessitated by the visa requirements of both their home countries, soon after that.
The light “Aussie chick meets and marries spunky pom” tone of the first half is fun, tasty and carefree, but when harsh reality and heartbreak bring a sadder, wiser tone, Andersen’s writing effortlessly changes gear to accommodate it.
By then you find yourself engrossed in her character, intrigued by her narrative and moving to the pulse of her words. It’s a wonderful effect, more than flexible enough to take you from humour to wretchedness and, finally, resolution without missing a beat.
By their nature, fringe festivals are hydra-headed beasts. You have razor sharp entertainments like The Wau Wau Sisters and Frisky and Mannish, but there's another side to them, small, independent alternative productions for which the fringe offers much needed oxygen. Love in the Key of Britpop is a fine example, and I hope its short season gets the audience it richly deserves.

This review appeared in The West Australian 9.2.13
Posted by David Zampatti at 8:36 AM No comments: