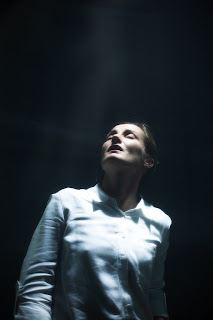 Elise Wilson is on some sort of trajectory. The 2018 WAAPA performing arts graduate dashed downtown from the Mt Lawley campus to the Blue Room where she’s been making waves as an actor in shows like Hive Mind and Grace (with much more to come this year). Even some of her purposeful performances as the theatre’s usher during the fringe stopped the chatter in the Blue Room’s foyer – now that’s an achievement!
She’s also found time to write, and Floor Thirteen, her first full-length play, is the result. It’s an auspicious debut.
A young, smart and aspirational lawyer, Phoebe (Kylie Bywater), is heading home from a party at her client’s apartment to celebrate his win in the big court case she’d been working on. She’s more than a little drunk, and much more than a little unsettled, so the last thing she needs is the lift to stick, somewhere between the fourteenth and twelfth floor.
Help is at hand, and soon a reassuring technician’s voice is keeping her calm while he sorts out the problem.
But calm isn’t on the agenda for Phoebe’s night, and the reason isn’t because she’s stuck in a lift. It’s what has happened that night, before she got in the lift, that has got her seriously unglued, and it’s finding out why that was – why that really was ­–­ that is Wilson’s story.
Floor Thirteen is about memory, how we build it and how it peels away like onionskin to expose the truth.
Wilson has worked closely with the producer/director/designer Marshall Stay and Bywaters, also recent WAAPA grads, and the result – the core of the production – is tight, clear and tense. Stay’s set, an all-but-transparent box representing the lift is a perfect performance space for Bywaters, and she brings Phoebe to nervy, jagged life. Stay’s ever-so-slightly-distorted soundscape and Scott McArdle’s lighting design amplify the uneasy energy and edginess of the text, and Bywaters’ performance.
However, there’s more to Floor Thirteen than one actor playing one stranded woman; as the unstable layers of Phoebe’s memory of events are exposed, they are performed as tableaux by an ensemble of performers – Tamara Creasey, Courtney Henri, Christopher Moro and Jordan Valentini – circling the lift. They silently mouth the conversations Phoebe remembers, or concocts, and give physical form to the shifting reality of events.
It’s tightly devised (“movement dramaturgy” – a new one for me – by Jessica Russell) and performed, but I’m not convinced it adds materially to the text or our understanding of its voice.
I’ve great admiration for the performing arts course at WAAPA, and the work it does to train students across the range of disciplines involved in theatre making. Because of the mix of forms and performance it employs, Floor Thirteen felt like an extension of that work, and that training, rather than a fully autonomous production. .
Whether that makes for the best use of these talents, or whether it best serves the text, is an unanswered question.  I left Floor Thirteen feeling I’d like to see it again, but this time with just the story, the actor and the technician’s disembodied voice, to make that judgement.