Theatre: She Dances in the Dark/When We Wake

She Dances in the Dark 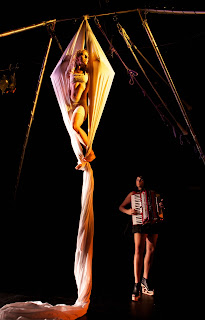 Blue Room Theatre
Until October 1
The short shows that run for much of their seasons in tandem at the Blue Room Theatre may not be designed as double bills, but seeing both in one night, as I did, is an interesting way to go about it.
While neither the aerialist Dawn Pascoe’s She Dances in the Dark nor the Clap Your Hands Collective’s When We Wake reaches the brilliant heights of the theatre’s recent productions of Scent Tales and Laryngectomy, both have their rewards.

Link here for the complete review in The West Australian
Posted by David Zampatti at 10:01 AM No comments:

Designed by Bruce McKinven
Featuring Cheree Cassidy, Tom O’Sullivan, John Stanton, Carol Burns, Caitlin Beresford-Ord, Hugh Parker, Damon Lockwood, Daniel Murphy and Gina Williams
Heath Ledger Theatre, State Theatre Centre
Sept 10 – Oct 2, 2011
Cat on a Hot Tin Roof is an audacious, free-spirited American masterpiece given a clearly struck and handsome revival by director Kate Cherry in the centenary of its playwright’s birth.
Its audacity lies in the almost complete elimination of plot and dramatic tension. The play takes place in real time in one room and, for almost all of its length, nothing consequential actually happens.
Even the one surprising thing that happens, Maggie’s startling announcement toward the play’s end, is unlikely to change these people or their lives, whether it is true or not.
Stripped of action and artifice, Cat on a Hot Tin Roof is a universal human drama of need and repulsion, love, hatred and, above all, lies and truth.
Link here to the complete review in The West Australian
Posted by David Zampatti at 10:58 AM No comments:

adapted from Woman in a Lampshade and The Sugar Mother
by Elizabeth Jolley
Directed and designed by John Senczuk
Featuring Ian Toyne, Christie Sistrunk, Val Riches, Sophie Kesteven, Anna Brockway and David McLeod
The Metcalfe Playhouse
Season ended
A couple, both of a certain age, find themselves feeling their oats at the same time with persons young enough to be their offspring during a mutually-agreed marital sabbatical.
University lecturer Edwin (Ian Toyne) stays at home while his doctor wife Cecilia (Christie Sistrunk) drives to their holiday house to work on the novel she’s always wanted to write.
Along the way, Cecilia picks up a dishevelled hitch-hiker (David McLeod) and, shortly enough, retires to a mattress with him for the duration. Meanwhile, Edwin’s home is invaded by his neighbours, the nubile Leila (Sophie Kesteven) and her manipulative and malapropative mother (Val Riches), and he is immediately struck with a severe case of the Humbert Humberts. Despite the best efforts – albeit with her own, dubious, motives – of the couple’s friend Daphne (Anna Brockway), Edwin and Leila are also soon in the sack.
Read more »
Posted by David Zampatti at 10:57 AM No comments:


Downstairs at the Maj
7 – 10 September, 2011
The Cabaret and Comedy Carnivale Downstairs at the Maj returns to safer waters this week with a pastiche of popular romantic songs showcasing the lyric soprano voice of Pamela Jansson accompanied by veteran Perth players Ashley Arbuckle (violin) and Sue Bluck (piano).
The great charm of the programme, an otherwise unsurprising collection of standards including Someone to Watch Over Me, The Man I Love, Cheek to Cheek, A Nightingale Sang in Berkeley Square, Embraceable You and Begin the Beguine (a small prize for anyone who can give me a scientific explanation for why I hate that song so much) was Jansson’s faithfully anachronistic delivery.
Read more »
Posted by David Zampatti at 10:37 AM No comments: