William Shakespeare wouldn’t be shocked by the horror in Ukraine and Gaza. He had seen into the hearts and minds of those who fire the rockets, those who give the orders, those who fall and those who loot, before, and understood their contents exactly.
His Henry V can easily be seen as a glorious procession and a strident hymn of patriotism, the soul of the idol washed clean with noble blood, but there’s little sanguinity, and much darkness, behind its flash and colour.
The director Damien Ryan works impressively to strip Henry’s glamour away. Setting the play in the temporary schoolroom of a bomb shelter during the London blitz, being performed by students, is a brilliant conceit, bringing its themes of patriotism, idolatry, propaganda and terror into sharp focus.
It’s only been a couple of years since I said Propeller’s testosterone-driven Henry V was the best I was ever likely to see. That’s remains true, but there won’t be many better, or more interesting, than this one.

Link here to the complete review in the West Australian
Posted by David Zampatti at 2:29 PM 1 comment:

I wish this review was able inspire you to rush out for tickets to Barking Gecko’s Jasper Jones. Sadly, despite its relatively long season (until August 9 in the State Theatre Centre Studio), it’s already all but sold out (extra performances on July 29 and August 4 have been announced).
There’s an obvious reason for this. The novel upon which it is based, by the young West Australian writer Craig Silvey, has been widely admired and wildly popular in the five years since its publication.
Barking Gecko have built a fine reputation – greatly enhanced during John Sheedy’s tenure as its artistic director since 2010 – as it made the ambitious transition from a children’s theatre company to one for young people of all ages.
This wonderful production is the apogee of their achievement so far.

(Jasper Jones contains some language and themes that might concern parents of children under 14.)
Posted by David Zampatti at 7:43 AM No comments:

Theatre: Confessions of a Pyromaniac

While Matthew Cooper’s Confessions of a Pyromaniac (directed by Shakara Walley at the Blue Room Theatre) isn’t in the first rank of Aboriginal theatre, it is undeniably and impressively liberating.
That’s because while three of its characters, and the actors playing them, are Aboriginal, their ethnicity is a subtext, rather than the defining factor in either their personalities or the play’s action.
There’s a continuing conversation about the opportunities for Aboriginal actors to play other than Aborigines; here Cooper inverts the argument by presenting characters who conform to none of the stereotypes, positive or negative, we’ve come to expect in the representation of Indigenous people on stage.

Link here to the complete review in The West Australian
Posted by David Zampatti at 8:47 AM No comments:

The title of Declan Greene’s Eight Gigabytes of Hardcore Pornography doesn’t tell its story, though it’s not irrelevant to it. What it is about is truth, happiness, and how bitter and elusive they can be.
The play is set in 14 vignettes, each introduced simply by the announcement of the number – co-incidentally an almost identical device to that employed recently in Tyler Jacob Jones’s impressive F*@k Decaf. Like it, Greene’s play flows seamlessly across these divides, often without even stopping for breath, giving his story an impressive momentum throughout the 80-odd minutes it takes to tell.

Link here to the complete review in The West Australian
Posted by David Zampatti at 1:53 PM No comments: 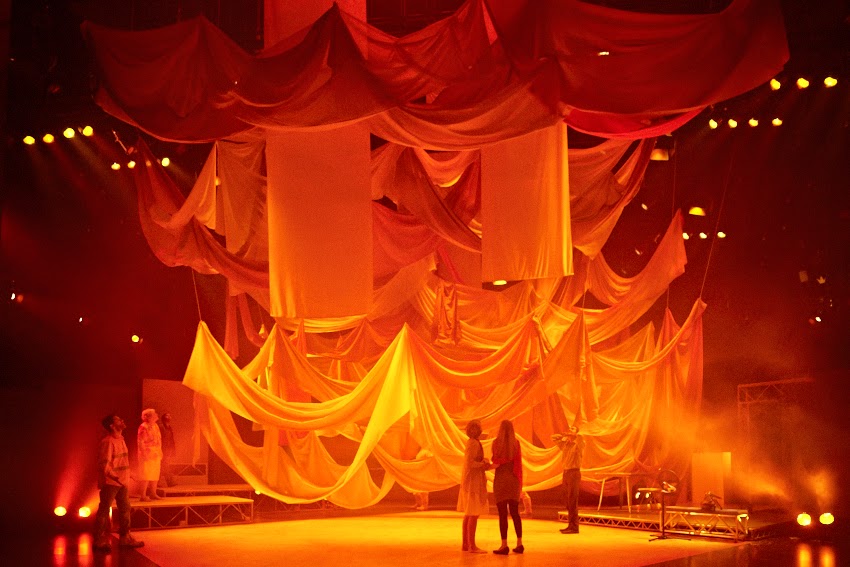 I owe the Black Swan Theatre Company, and the playwright Suzie Miller, something of an apology. As it turns out, Dust, her play that takes place as a cloud of red dust engulfs Perth, is far less portentous and apocalyptic than I feared it would be. It’s also lighter, sweeter and a deal more fun than I expected.

Link here to the complete review in The West Australian
Posted by David Zampatti at 8:06 AM No comments: