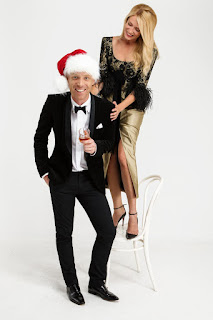 On Thursday, America’s Santa Claus-elect, Donald Trump, declared that “we are going to say Merry Christmas again!”
Sadly, he couldn’t make it Downstairs at the Maj that night (although a man who looked alarmingly like his vice-president did), but he would have approved mightily.
As if inspired by The Donald’s pronouncement, John O’Hara, Gillian Cosgriff and Andrew Kroenert give the festive season a ticker tape parade in A Very Merry Christmas, and it’s a winning display of their talents and chutzpah.
Kicking off with It’s Beginning to Look a Lot Like Christmas – first as is, then given a “Perthmas” reboot – the trio gambol through everything Yuletide, from the sacred (The First Noel, Silent Night, a genuinely stirring O Holy Night) to the profane (Santa Baby, My Simple Christmas Wish), but most of the material is straight out of the Great American Christmas Song Book  – I’ll Be Home for Christmas, All I Want for Christmas is You, Let it Snow, The Little Drummer Boy, Have Yourself a Merry Little Christmas, Santa Claus is Coming to Town and a tricked-up sing-along to 12 Days of Christmas (seven months of Netflix, six Crossfit sessions, five nut allergies…).
We know these songs; they’re a huge part of First World Fantasyland, secure behind its white picket fences and gathered around the presents and the ham. Maybe they are a mirage and a hoax – often a cruel one – but in these hands they are sweet, tasty and irresistible.
Trussed up in a suit of indescribable colour, tall, bald, and just a touch cracked, O’Hara is a generous ringmaster, and a grand performer. Cosgriff (who’ll be back soon with a new show for Fringe) is immaculate, charming and slyly capable of delivering showstoppers without seeming to lift a finger. Kroenert is the dabbest of hands on piano – Cosgriff tinkles as well – and guitar and adds plenty of vocal heft as well.
Taken separately, they’re a treat. Together, they’re a banquet.
Could they have done more? Would, say, Tim Minchin’s White Wine in the Sun or the Pogues’ Fairytale of New York have added some flavour and bite to the sugary feast?
Perhaps – but why quibble? For one sweet hour O’Hara, Cosgriff and Kroenert wrap us up an early Christmas present with the prettiest bow.
And – this time at least – Donald Trump has hit the nail on the head.

This review appeared in The West Australian 17.12.16
Posted by David Zampatti at 9:30 AM No comments: 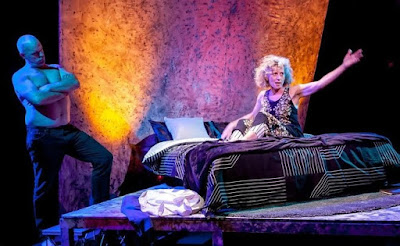 Paul and Lanie Macbeth (Greg Fleet and Nicol Bartlett) are a power couple of big fish in the very small pond of WA politics. She’s a lawyer, he’s the new Member for Cannington and a Man Who Would Be King.
Which doesn’t bode well for Premier Byron Duncan, or even the Macbeth’s good mate James Banquo (the terrific Luke Hewitt).
But while Fleet  may be a celebrated stand-up comedian, he’s no fool. He’s adroitly dodged the traps lying in wait for this production; it’s not a contemporary adaptation of Shakespeare’s Macbeth, and neither is it a parody of WA politics.
I’ve no doubt that there’ll be people who find Signifying Nothing far from their liking, but, for me, it’s another highlight in a Blue Room season that’s had a bundle of them.

Read the complete review in The West Australian
Posted by David Zampatti at 8:04 AM 1 comment:

Devised and directed by Samantha Maclean and Timothy Green
Performed by Ann-Marie Biagioni, Elijah Melvin and Taryn Ryan
Blue Room Theatre
Until November 26
Twenty minutes or so into Samantha Maclean and Timothy Green’s slick, erotically-charged Tissue, I stopped taking reviewer’s notes. My last scribble, a not particularly perceptive “Oh Boy! Wowee!”, was testament to both the sheer quantity of its action, and the dazzling way it had been delivered.
The story is as contemporary as the last time you Googled, but as old as time. Zoe (Taryn Ryan) and Alex (Elijah Melvin) meet in one of those modern on-line ways, and Tissue tells the arc of their love affair, through attraction, affection, compulsion and addiction. It’s pornographic, onanistic and obsessive, love measured in hits, clicks and comments, but its mutant beauty is something Sophocles and Euripides would understand.

Read the complete review in The West Australian
Posted by David Zampatti at 4:45 PM No comments:


Posted by David Zampatti at 11:14 AM No comments:

by Moliere
adapted by Justin Fleming
Black Swan State Theatre Company and Queensland Theatre Company
Directed by Kate Cherry
Designed by Richard Roberts
Lighting designer David Murray
Sound designer Tony Brumpton
With Jenny Davis, Darren Gilshenan, Tessa Lind, Hugh Parker, James Sweeny, Steve Turner, Alison van Reeken, Emily Weir and Alex Williams
Heath Ledger Theatre
Until November 6 We’re in a ritzy two-story house in an affluent Australian suburb (an eminently liveable set by Richard Roberts). There’s a party going on.
It’s Moliere’s Tartuffe, but the house, the people in it, and the language they use, are straight out of David Williamson.
Justin Fleming’s adaptation of the great French comedy of extremely bad manners doesn’t tamper with the characters and their station in life, or the arrangement of the text.
That takes a little getting used to. Rhyming couplets, of which the dialogue in Moliere and Fleming’s adaptation is composed, can seem to our unaccustomed ears like pantomime doggerel.
But the director Kate Cherry and her cast take on the audience’s early qualms with heedless confidence, and it pays off.

Read the complete review in The West Australian

Posted by David Zampatti at 9:12 AM No comments: 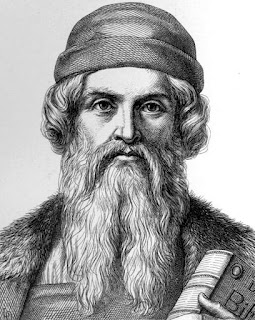 Holland Street Productions are the tiny Perth theatre company that can. Their hits include the 2014 Perth Fringe winner Point & Shoot that went on to collect gongs at the Sydney and Brighton fringes, this year’s rambunctious Dr Felicity Rickshaw’s Celebrity Sex Party and the wonderful café confessional, Fuck Decaf.
Which makes their decision, despite the in-house writing heft of Tyler Jacob Jones and Robert Woods, to take on a decade-old Off-Broadway pocket musical especially interesting.
It doesn’t take long to see why they did it. Gutenberg! The Musical! is a sleek, high-octane vehicle, and Jones and Andrew Baker keep their pedal to the metal for all its 85 minutes (plus a 20-minute recuperative interval that the audience needs as much as the performers).
Bud and Guy, two less-than-gifted writers, pitch their idea for a musical about, of all things, the invention of the printing press by Johannes Gutenberg. Finding little information about Gutenberg on Google, they resort to a historical fiction (“fiction that’s true”) set in the happy but horribly filthy German town of Schlimer, inhabited by characters like his straw-blonde, half-witted assistant Helvetica and the Satan-worshipping Monk (both his name and profession).
As Bud and Guy are pitching in their street clothes, they identify the characters by putting on caps with titles like Drunk Man, Beef Fat Trimmer, Anti-Semite (a recurring gag), Rat and Whore on them. There are lots of caps – at one time they are pegged to a clothesline to form a Chorus Line – and they are swapped in a dizzying whirl of action.
Meanwhile, Bud and Guy use and misuse every convention of musical theatre – the happy opener, the rocking first act closer, the romantic ballad – in a series of adorably ridiculous songs (Joshua James Webb’s keyboard accompaniment is elite) as we thunder towards the inevitable happy ending.
If I’ve got an issue with the show, it’s only that it’s almost too fast, too jam-packed. Much as I enjoyed it – and that was very much – I was a little relieved when it was over.
That small discombobulation aside, Gutenberg! The Musical! is another winner from this great little troupe. I wouldn’t miss it for quids.

This review appeared in The West Australian 29.
Posted by David Zampatti at 8:58 AM No comments: