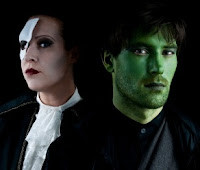 The team of Nick Maclaine, Andrew Williams and Izaak Lim have become something of a local hit factory.
Their production for last year’s Cabaret Soiree series, the Cole Porter memoir You’ve Got That Thing was a rung or two above most of the entertainments staged during these seasons. Its script had substance, the music was elegantly performed and they wisely brought in the experienced and perceptive Michael Loney to direct.
Loney is not back this time, and the script has been reduced to occasional patter between songs. Guy/Doll suffers badly for both absences.
I wanted to like Guy/Doll much more than I did, and I believe its creators are capable of much better things. Choosing songs because there is a reason, rather than merely an excuse, to do them would be a good place to start.

Link here to the complete review in The West Australian
Posted by David Zampatti at 2:04 PM 1 comment:

Theatre: Black as Michael Jackson/ Hello, My Name is…

Yirra Yaakin, WA’s fine indigenous theatre company, is bringing two shows to the Blue Room’s first 2012 season.
The first, Black as Michael Jackson, written by Karla Hart and Michelle White and performed by Hart and Della Rae Morrison, is a series of loosely connected vignettes that deal with questions of identity in indigenous life and culture in Perth and regional WA.
At its best it’s funny, confronting and revealing. Hart is a feisty, valiant actor, and she brings a combative energy to her recurring character, Amy, and other roles. Morrison’s Nell is older and sadder, and their combination gives a range of experience to the happy, funny, sorrowful and tragic circumstances they describe.
The later show at the Blue Room, Melbourne performance artist Nicola Gunn’s Hello, My Name Is … all but defies review. Gunn is a theatrical risk-taker, and this piece, which she cheerfully admits is in the very early stages of its development, is a big one.

Link here to the complete review in The West Australian
Posted by David Zampatti at 3:48 PM No comments:

She’s a darlin’ girl, Camille O’Sullivan, but I wouldn’t share a house with her. The lounge room floor littered with discarded clothes, booze stashed everywhere, tables covered in knick-knacks, those meows and shrieks she comes out with, and that unsettling way of hers, part Nigella Lawson part Jane Horrocks.
She’d have a crackin’ record collection, mind.
Both sides of O’Sullivan, the nightmare housemate and the brilliant musical auteur, were on display at the Astor Theatre last Thursday during a flying visit to Perth after a stint at the Adlelaide Cabaret Festival.
The somewhat ramshackle first half suffered from a misplaced sound mix and O’Sullivan’s mannered eccentricities. They fit her mixed-up, shook-up Irish-French persona, but they do little for the songs she interprets. And, really, the eight numbers before interval didn’t need zany embellishment. A couple of less-travelled Nick Caves (Oh My Lord and The One I’ve Been Waiting For), Tom Waits’s The Briar and the Rose, and a brace of carnal women’s songs (Bessie Smith’s Sugar in My Bowl and Kirsty MacColl’s In These Shoes) were mighty. Best of all was her unaccompanied howl of Jacques Brel’s The Port of Amsterdam, stripped of its Gauloises-and-accordionated charm and dumped, semen-stained and bloody, in an alley behind the docks.
Read more »
Posted by David Zampatti at 3:54 PM No comments:

It’s a self-evident but nonetheless thought-provoking truth that if you’re one in a million, there are thirteen hundred of you in China.
It kept bouncing around my head while homecoming princess Lucy Durack, she of Wicked (and soon-to-be of Legally Blonde the Musical) fame, worked through songs from the repertoire of her friend, collaborator and fellow WAAPA graduate Matthew Robinson.
Their short, seriously sold-out stand opens this year’s Cabaret Soiree season downstairs at His Majesty’s Theatre.

Link here to the complete review in The West Australian
Posted by David Zampatti at 5:05 PM No comments:

Theatre: Summer of the Seventeenth Doll

Ray Lawler’s 1955 play, Summer of the Seventeenth Doll, occupies a formidable place in the history of the Australian stage, rather like Patrick White’s novels of the same vintage do in its literature. It bears the weight of comparison to the gigantic American and British naturalist dramas of the mid-20th century: Arthur Miller’s A View from the Bridge and Tennessee Williams’s Cat on a Hot Tin Roof premiered the same year; John Osborne’s Look back in Anger the year after.
It also suffered a bowdlerised, Americanised film version in 1959, happy ending and all, that did its reputation no good at all.
For all these reasons, “The Doll” has long been a play admired from a distance. In the WA of 2012, though, it offers something much more immediate.
Read more »
Posted by David Zampatti at 5:47 PM No comments: 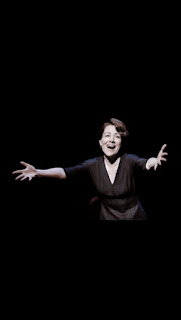 Kate Ceberano says Bernadette Robinson’s one-woman show, Songs for Nobodies, best characterises the personality of her inaugural Adelaide Cabaret Festival.
It’s a big claim to make for one show at arguably the world’s most prestigious effusion of cabaret artists, but it’s easy to see why she makes it. Ceberano’s festival celebrates storytellers and divas – and there are plenty of both among the 50-odd acts that cavort across its 16 days.
Robinson’s show, devised by Joanna Murray-Smith and directed by long-time Melbourne Theatre Company supremo Simon Phillips, has five storytellers matched with five divas, and, in Judy Garland, Patsy Cline, Edith Piaf, Billie Holiday and the diva assoluta Maria Callas, it can’t be accused of setting the bar too low. Add to that the tidal wave of acclaim and house-full signs that swept this show into Adelaide (and this week into Perth) and you can see why one reviewer gushed “Songs for Nobodies is for everybody”.

Link here to the complete review in The West Australian
Posted by David Zampatti at 5:40 PM No comments:

Theatre: How To Succeed in Business Without Really Trying

This exuberant musical made a star of Robert Morse 50 years ago and still had the zing to turn Daniel Radcliffe from a dorky kid with a wand into the wizard prince of Broadway in 2011. It’s Mad Men put to music, complete with rotary phones, drinks cabinets, naked ambition and, of course, a knockout typing pool.
This is a whiz bang production with 36 all-singin’-all-dancin’ guys and goils backed by a 28-piece orchestra, a show you just won’t see in this town produced and performed with this flair and quality otherwise, and there are still tickets to be had. I wouldn’t wait too long to get yours.
Read more »
Posted by David Zampatti at 1:04 PM No comments:

Email ThisBlogThis!Share to TwitterShare to FacebookShare to Pinterest
Labels: How to Succeed in Business Without Really Trying, WAAPA

8 – 23 June 2012
The story goes that Kate Ceberano has had five gowns, all of the same silver glitter fabric, made for the Adelaide Cabaret Festival. As the annual festival’s artistic director and party-gal-in-chief, she’s going to need all of them.
Now in its 12th year, the festival plays out across eight venues, most in the riverside Adelaide Festival Centre, with 48 Australian and international acts performing over 13 days. Centre chief Douglas Gautier says more than 30,000 tickets, or over 90% of targeted sales, had moved by the festival’s first weekend, and with total attendance at its shows, exhibitions, restaurants and bars estimated at 95,000, the festival is among the largest of its kind in the world.
More importantly, it’s part of a year-round fabric of strategic events based around the Festival Centre and Adelaide’s parklands that earn South Australia its “Festival State” tag and contribute substantially to its marketing mix.

Link here to the full article in The West Australian.  I was a guest of Advantage SA at the Adelaide Cabaret Festival.

Posted by David Zampatti at 12:39 PM No comments: