Blue Room Theatre
May 25, 2011
James De Leo is a hard working lad, and the fruit of his considerable labours over the past few years was on show at his one-night Wild West Comedy Festival stand downstairs at the Blue Room.
Drawing from his 2009 Not Without My Porter show and debuting new material, De Leo delves into familiar territory from the byways of history to the mores of modern times.
In his 45-minute stand he delved into the natural history of the redhead, explained the heraldic symbolism of coats of arms and their application to modern corporate branding and translated bogonese into Latin.
Television and the web are the natural media for the cool performer; “hot” media – film, radio and live performance – need more punch, more absurdity and more spontaneity than De Leo delivers, at least on this occasion.
De Leo works across a wide range of media, and it’s interesting to see and hear which work for him and which don’t. For example, while his radio spots on Mix 94.5 to me are laboured and over-scripted, he can be very effective in You Tube clips. I’m sure he has a very funny, very clever book in him and, if I were a wild and crazy guy needing material for my show, I’d definitely be giving him a call.
Link here for the complete review in The West Australian
Posted by David Zampatti at 10:25 AM No comments: 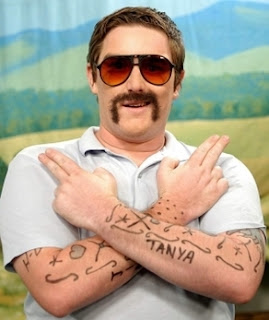 In fairness, and just to be on the safe side, let’s give the first word to Mark Brandon Reid: “Yeah, it’s very good, it’s very funny, but he’s only impersonatin’ Eric Bana who’s impersonatin’ me.”
Truth is, that take from a Reid interview is a pretty good summary of Chopper’s F**kin Bingo, the latest foray by the comic character created by Franklin.
The show opens with an obscenely inspired Chopper’s-eye-view of some otherwise standard stand-up material, his attitude to all of which can be neatly summarised by his catchphrase, “harden the fuck up!”. The audience in the venerable Astor, packed for this Saturday night Wild West Comedy Festival show, roared its approval.
Read more »
Posted by David Zampatti at 11:15 AM No comments:

Anytown sits out on the flat and seethes. The little town of a blow-in or two and 900-odd people named Willis bury their dead and dig up their dirt, air their grievances and their dirty linen, and drink from bottomless cups of tea. There’s one road in and one road out of Anytown, and precious few people take either.
In the house of the town cop Charlie and his wife Bella Willis (Matt Penny and Gaynor O’Hare), their delicious sixteen-year-old Dixie (Whitney Richards) hatches her plots. Dixie is a born sexual manipulator; she’s inherited her mother’s carnal allure, but none of her sweetness or resignation. She’s entirely unscrupulous, and entirely indiscriminate, tormenting the mute town boy Paulie (one of several roles played by by Craig Williams) and their scabrous Scottish lodger Angus (Kingsley Judd).
Angus, though, shares a secret with Bella who, in turn, is keeping something from both him and her husband. It’s that kind of town
When a dark stranger (Williams again) appears, bringing with him something mysterious in a hatbox, he represents the chance of escape for Dixie. She goes to work on him, but, for the first time in her life, it just might be her that’s being done over.
Read more »
Posted by David Zampatti at 2:27 PM No comments:

Her Infinite Variety Ensemble
Directed by Jenny De Reuck
Designed by Sarah Duyvestan
Featuring Nicola Bartlett, Helen Doig, Tiffany Barton, Angelique Malcolm, Natalie Ryan-Brand, Olivia Hogan, Shirley Van Sanden, Mikala Westall, Emma Jermy, Sarah Courtis, Claire Munday and Rhoda Lopez
Subiaco Arts Centre Studio
Until May 21
The William Shakespeare of the early 1590s was a young man in a big hurry. He’d had some success with a couple of comedies and histories but aimed for a stake in the prestige market for tragedies, which was dominated by Thomas Kyd and the firebrand Christopher Marlowe.
His first foray into tragedy was Titus Andronicus, a messy, ill-formed piece of Ovidian and Senecan bloodbathery that wanted for nothing in energy, for all it lacked in artistic merit. Think of the Saw movie franchise.
So now, 350-odd years later, we’ve got an all-female Titus Andronicus produced by a mono-gender (its description) theatre company aiming to redress the imbalance in male/female opportunities in the acting profession.
That’s a noble enough intention. I just wish it had chosen a more likely vehicle in which to make its debut.
Read more »
Posted by David Zampatti at 11:14 AM 2 comments:

Black Swan State Theatre Company
Directed by Kate Cherry
Set design by Christina Smith
Costume design by Alicia Clements
Lighting design by Trent Suidgeest
Sound design by Ash Gibson Greig
Featuring James Beck, Elizabeth Blackmore, Benj D’Addario, Adriane Daff, Arielle Gray, Stuart Halusz, Brendan Hanson, Luke Hewitt, Natalie Holmwood, Michael Loney, Sam Longley, Kelton Pell, Myles Pollard, Kenneth Ransom, Scott Sheridan, Alison van Reeken and Shubhadra Young
Heath Ledger Theatre, State Theatre Centre
May 11 ­– 22, 2011
There’s no mystery to the enduring popularity of A Midsummer Night’s Dream or its allure for directors and actors. The earliest of Shakespeare’s very greatest plays, its poetry – the Oxford Dictionary of Quotations selects 63 separate passages from it – and sheer sexiness, its bravura set pieces and memorable characters are an irresistible mix.
Director Kate Cherry wisely lets the text, rather than any real or imagined sub-text, do the talking, and by and large it works for her.
Luke Hewitt’s turn as the immortal Bottom is a great success. Hewitt is a big, funny man, which makes Bottom the figure of fun meat and drink for him, but he’s got the sensitivity to deliver the character’s humanity and essential goodness. We can laugh at Bottom, but we need to respect him as well, and Hewitt makes us do both.
Alison van Reeken’s Titania is armed and dangerous, with weapons both human and supernatural at her disposal, even when lost in love or lust. She’s a knockout.
Read more »
Posted by David Zampatti at 9:10 AM No comments:

For the Perth Theatre Company, PICA and Mobile States
Written and directed by Halcyon Macleod
Music and sound design by Declan Kelly
Featuring Michelle Robin Anderson, Anthony Ahern, Clare Britton, Sam Routledge, Jodie Le Vesconte
STC Studio Underground
4 – 8 May, 2011
The Perth Theatre Company’s tenure at the new State Theatre Centre Studio, which began impressively in March with The Ugly One, delivers again with a flying visit from Melbourne outfit My Darling Patricia.
If you thought you had outgrown puppetry, their excoriating Africa should make you think again.
The play is inspired by the charming true story of two German kids aged six and five who tried to elope to Africa in 2009, but is grounded in the brutal reality of childhood in the dark continent that broods on the fringes of Australian suburban life.
Writer and director Halcyon Macleod has fashioned a very grown-up story (adult themes and language warnings apply) through the wide eyes of three children, the sisters Courtney (Michelle Robin Atkinson) and Bubba (Clare Britton) and their neighbour Cheedy (Sam Routledge).
Left alone with a video one night, the kids are swept away by a nature documentary about Africa, and resolve to escape to it. 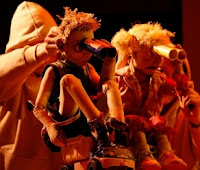 They have much to escape from. The girl’s mother Julia (Jodie Le Vesconte) leads a barely viable life, assailed by unpayable bills and process servers while her little family is stalked by community welfare officers and menaced by Brad (Anthony Ahern), the abusive, dangerous man who comes in and out of her life.
No doubt little Cheedy’s home life is just as dangerous: he wears a cast on his forearm; he’s hospitalised after a beating.
It’s a jungle, of course, and in it the cubs are not safe.
Read more »
Posted by David Zampatti at 8:14 AM No comments: