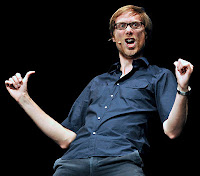 It’s a fair assumption that most of the audience at Stephen Merchant’s three sold-out Astor shows were hard-core fans of the vertically unchallenged British comedian and his collaborator Ricky Gervais.
Gervais has had comedy superstar status for years – I remember seeing him gigantically reproduced on a whole-side-of-building billboard on Sunset Boulevard ­as far back as 2008. Merchant may be Larry David to Gervais’s Jerry Seinfeld, but he’s steadily emerging in his own right.
On the strength of this poised, neatly calibrated, and very, very funny solo show, it’s easy to see why.
Read more »
Posted by David Zampatti at 7:23 AM No comments: