Black Swan State Theatre Company
Written by Tom Stoppard
Directed by Kate Cherry
Heath Ledger Theatre, State Theatre Centre
21 March - April 1, 2012
If ever a play has mastered the trick of being at once intricate and undemanding, Arcadia, Tom Stoppard’s 1993 intellectual parlour game about four generations of one family in one room but 180 years apart, is it.
The reason is simple; there are all sorts of theories to explain the world, many of which – chaos theory, fractals, Kelvin’s theory of heat, the 2nd law of thermodynamics, population theory – are given a good going over in Arcadia, but, as the concupiscent Chloe Coverly (Adriane Daff) proclaims, it’s sex that makes it go around.
And it’s sex, in word and deed, which drives this creamily satisfying revival by Kate Cherry’s Black Swan State Theatre Company. There is much bonking done or denied, conspired for or hankered after, in picturesque locations like gazebos and piano rooms – all, I have to report, safely off stage. The talk may be of literary criticism, landscape gardening and all that mathematics, but there’s too, too solid flesh stirring urgently under those elegant muslins and linens (prettily draped by designer Alicia Clements, whose costumes and wedding-cake set are all that could be wished for).
This is not to say that Stoppard’s academic musings are merely a front for a bedroom farce. His ruminations on life, science, art and the pros, cons and pronunciation of ha-has are finely drawn and pleasurable, while the architecture of the play, the easy way it moves its apple from Isaac Newton to Steve Jobs, and the confident, unpushy way the playwright manages internal and external speculation (Did Lord Byron cuckold and kill Ezra Chater? Was Septimus Hodge the hermit in the Coverley’s garden?) is justly admired. It’s all gloriously stimulating and, as long as you don’t fall into the trap of taking Stoppard too seriously – I’m sure he never does – great fun.
Read more »
Posted by David Zampatti at 11:42 AM No comments:

Directed by Andrew Lewis
Musical director/composer Reg Cribb
Set and costume designer Lauren Ross
Performed by WAAPA 3rd Year acting students
Roundhouse Theatre, WAAPA
16 – 22 March 2012
Clinchfield, Caleb Lewis’s saga of small town hysteria and its consequences, opens the performance series for the 2012 graduating acting class at WAAPA.
As always, it’s an important opportunity for the year’s batch of emerging performers to shine in public.
This production is of particular significance as the first public appearance of the inaugural winner of the Richard Burton Award for New Plays. Prizes are an important incentive in this under-remunerated industry, but the mark of the award, and what Sally Burton is no doubt seeking to foster with it, must surely be works that can be successfully and repeatedly staged in the professional theatre.
Link here to the complete review in The West Australian
Posted by David Zampatti at 7:09 AM No comments: 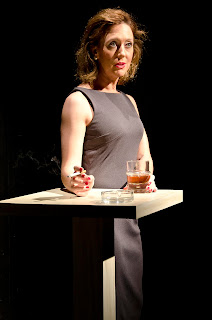 The American poet, Anne Sexton, is little remembered today, but in the 1960s her Pulitzer Prize-winning confessional poetry bridged the gap between her greater friend, and fellow suicide, Sylvia Plath, and the introspective singer songwriters that rose to prominence around the time of her death in 1974. She was a star, and she burned like one.
Red Silk, Lois Achimovich’s play about Sexton, directed by the distinguished Aarne Neeme, does a fine job of historical fiction recounting the poet’s psychological decline in the late ’60s. Roz Hammond plays her large: flirtatious, magnetic and lugubrious. Luke Hewitt and Dan Luxton, as the conflicted psychiatrists who treat and exploit her, give strong supporting performances. Lawrie Cullen-Tait’s economic design, especially her leading lady’s hubba-hubba little grey dress, nails the period nicely (Hammond could walk into series five of Mad Men without batting a socket-lined eyelid).
Read more »
Posted by David Zampatti at 5:26 PM No comments: 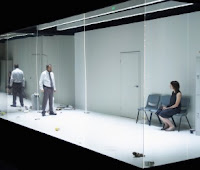 Put two people in a room, turn on the heat and stir. It’s an exciting, but hazardous, recipe for theatre; when there are so few ingredients they have to be painstakingly matched and carefully prepared, or things can go badly wrong.
On a whim, maybe a hunch, I read David Harrower’s play a couple of days before seeing Melissa Cantwell’s production at the STC Studio. What I found was a long dramatic poem, often powerfully reminiscent of Philip Larkin and, especially, T.S. Eliot. Dialogue is broken into shards of thought, repeated and sharpened like a pencil to breaking point, heightened, nerve-stretched, and reductive in the best possible way. It’s a brilliant script on the page. It also seemed to me a daunting piece to convincingly bring to the stage.
Link here to the complete review in The West Australian

Posted by David Zampatti at 3:26 PM No comments:

Circa and I Fagiolini
Directed by Yaron Lifschitz
Musical director Robert Hollingworth
Winthrop Hall
February 29, 2012
There were high expectations for How Like an Angel, the union of circus and vocal music which made its world premiere in Winthrop Hall on the auspicious 29th of February.
Auspicious because the show, a co-production of PIAF and the Norfolk and Norwich Festival, has been commissioned as part of the celebrations attending that other phenomena of this leap year, the London Olympic Games.
It wasn’t just Brisbane’s cutting edge circus theatre Circa, the celebrated English vocal ensemble I Fagiolini and the producers who assembled at Winthrop with high expectations.
We got everything we came for, but, ultimately, How Like an Angel was something less than the sum of its wonderful parts.


I Fagiolini too often seemed to be in excess of requirements. This came to a head when they burst into a piece by the Zulu composer Bheka Dlamini in the style of Joseph Shabalala and his Ladysmith Black Mombazo. The singers performed it with enjoyment and enthusiasm (right down to a little unassuming ululation), but what it meant, and what it was doing there, simply escaped me.

Link here to the complete review in The West Australian
Posted by David Zampatti at 10:46 AM No comments:

Email ThisBlogThis!Share to TwitterShare to FacebookShare to Pinterest
Labels: Circa, How Like an Angel, I Fagiolini, PIAF 2012

The Festival Gardens
February 28, 2012
Apart from being a whole lot of fun, the Turkish/Australian gypsy band Baro Banda’s exuberant show at the Festival Gardens taught us a lot about the music that inspires these six peripatetic musicians.
The trick is in the rhythm, the “beat of nine”, which the band’s charismatic lead singer Murat Yucel demonstrated before leading us in clapping and then dancing to it. This nine-beat rhythm is behind much music for the belly dance, as well as Turkish and Greek folk songs. You can practice it at home: it goes 1 2 3 1-2, 1 2 3 1-2.
It’s a quite distinct feel from the rhythms of Western Europe and Africa in our musical DNA, and it evokes a different physical response from the blues and rock ‘n’ roll beats we’re used to.
That’s the driving wheel of the music. Its magic is the insinuating melody that weaves through and above the rhythm. In the hands of the band’s gypsy clarinet master Savas Zurnaci, those tunes led us away to different places and times.
Link here to the complete review in The West Australian.
Posted by David Zampatti at 9:00 AM No comments: