Love is all around in Yirra Yaakin’s brand spanking new humdinger of a rom-com – and as always with love, things are never black and white.

Dating Black, the debut play by Narelle Thorne, is a laugh-a-minute romp through the minefield of dating and romance, but it’s a lot more than that.

It achieves a remarkable double – it’s as light as air, the story of five really nice people who all get what they want and need without serious conflict or major setbacks, but I think you can make a case that it’s also one of the more significant new plays on the Perth stage in recent times. I’ll get back to that.

Djinda’s moved back in with family after her marriage ended badly, and like Hope, who is also single, is absolutely available. Her aunt Maisie is no obstacle to their romantic ambitions, but the same can’t be said of Marley, whose protective nature is suffocating.

The girls are out on the town (they’ve told Maisie they’re going to “church” but they mean the local nightclub of that name, not a building with a pulpit in it), and run into Justin, who’s visiting on business.

Djinda and Justin get on like a house doused in petrol and set alight, which is fine by Hope and Maisy – not so much with Justin though. Ah, but the course of true love…

Thorne writes with sweet insight and a fetching, light feel for comedy, and she and first-time director Bruce Denny make Dating Back’s 75 minutes a rib-tickling pleasure.

And it’s brought to life by a fabulous bit of casting; Bobbi Henry is a knockout as Djinda, mercurial and sexy as all get-out, and Tegan Mulvany matches her fire and sparkle; Derek Nannup is a perfect foil for Henry, debonair and sincere, he does the dark horse to a T.

Let’s give it up for Rayma Morrison; a born comedian, she’s as wise as she is wisecracking, impish, the funny bone of the show – we should all have an auntie like her.

And a brother like Maitland Schnaars; this excellent, statuesque actor is clearly enjoying working a comedy, and his dignity shines through even when he’s the butt of many of Dating Black’s jokes. (By the way, Schnaar’s daughter Cezera is starring in the brilliant Little Women at the Blue Room – check out your diary, you’ve only got a week to catch them both!)

So why is Dating Black so important? It’s the most natural yet development of a significant change in Aboriginal, and especially Noongar, theatre so powerfully led by Yirra Yaakin under its artistic directors Kyle Morrison and now Eva Grace Mullaley.

In it, Indigenous people, their lives, their familial and community cultures, are not represented as needing explanation let alone justification.

In Dating Black there is no signposting or drum-beating at all (and I’m not here suggesting that they haven’t been legitimate, or necessary, given the history of colonialism, neglect and oppression in this country). The people of this play are leading lives on their own terms, and our common humanity goes without saying.

Just as important, and a source of great inspiration, is the continued rise of Noongar language. Yirra Yaakin, with their all-Noongar Hecate and Fists of Fury in the last two Perth Festivals, are leading this process, as are performers like Gina Williams and Guy Ghouse, with their lullabies, songs, and now even an operetta, in language.

The increasingly complex and insightful Welcomes to Country are another platform for knowledge and appreciation of the language.

Dating Black is in English, sprinkled with Noongar words and phrases that are becoming better known and added to our general vocabulary.

This is a wonderful thing, because Noongar is a beautiful and expressive language. Its return as a widely-known and naturally adopted living language, the de facto second language of West Australians if you will, is something we should all hope for and look forward to.

Posted by David Zampatti at 12:29 PM No comments:

Written and performed by Stace Callaghan 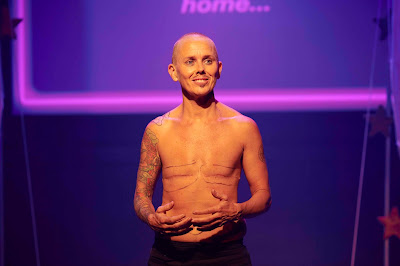 There’s nowhere else to begin but with admiration – for the powerful and courageous life Stace Callaghan has lived and continues to live, for their emotional insight and poetic command of language, and the sheer energy and honesty of their performance.

Callaghan has taken the world head on – not because they have an axe to grind, a sermon to deliver or a point to prove, but because they are prepared to reach out for freedom, and to wear the scars that come with it.

Growing up in that big old dirty river town Brisbane in the 1980s was tough enough for any kid (I did it a couple of decades before then and it was no joke); behind the glitz of Expo on the South Bank and the maroon ecstasies of Lang Park and King Wally Lewis, there were the shadows of Bjelke-Petersen and Hinze, the white shoe brigade and Commissioner Terry Lewis.

For the queer community it was a hostile, even dangerous, place to be.

But Callaghan survived it, in some inward sense thrived in it, and the person who emerges so clearly as they tell their story, is an inspiration, not just to LGBTIQ+ people but to anyone who seeks freedom and change where it is not encouraged or even available.

Of course there are scars (and those who might struggle with physical ones should be warned – though not discouraged), and Callaghan is remarkably frank about those they has suffered and, by and large, overcome.

Such is their felicity with language, though, and such is their sweet soul, that the journeys they take us on have touching pleasure and sharp humour of their own.

So that transition, in the universal as well as the personal, is their purpose and subject (they delight in Transperth by the way), whether it’s the story of how their mum and dad have changed, or the last moments of their beloved dog.

And Queer as Flux has spirituality, anchored in Callaghan’s real life but aloft on their imagination; so a recurring encounter with whales on Hervey Bay in Central Queensland becomes a phantasmagorical meditation on ecology and change.

Leah Mercer, whose work with her The Nest Ensemble co-founder Margie Brown Ash has produced some of the most memorable Blue Room performances of the last decade, directs with astuteness and touch, and the interplay between light and sound (Peter Young and Olivia Cosham) is nanometre-perfect.

Unfortunately, somewhere in the process of organising Queer as Flux’s content, an awkward, superfluous character, the drag queen Polly Tickle, is injected into the narrative (though not Callaghan’s life, where Polly plays no discernible part).

Polly’s main purpose seems to be to provide a LGBTIQ+ historical context into Callaghan’s own story, but much of it is common knowledge and that which isn’t could have been left to Stace themselves to tell – much more effectively.

That aside, this is a powerful performance and an insight into lives lived differently, and bravely, that will reward your attention.

Posted by David Zampatti at 11:40 AM No comments: