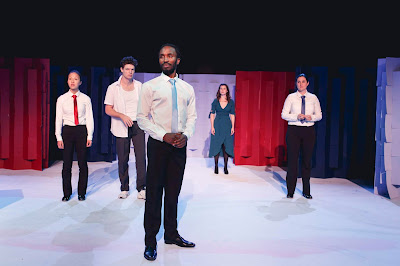 Groucho Marx swore that he would refuse to join any club that would have him.
The protagonist (perhaps not quite the perfect description) of Jeffrey Jay Fowler’s Improvement Club has an antonymic problem; he wants to be in a club and has a gift for starting them – he just struggles to stay in them.
Adam’s (Chris Isaacs) error is constitutional; the stated purpose, or at least the marketing pitch, of the clubs he founds is Improvement. The catch is that he has no real interest in that purpose. He just wants a way to get to hang out with people who would otherwise shun him.
They – Cameron (Gita Bezard), Dylan (Frieda Lee) and Blake (Mararo Wangai) – discover soon enough that improvement, to Adam, is measured in quantity, not quality, and reject, first, his leadership, and then him.
He tries again and again, searching for ways to ensure his primacy and survival, each time failing in the face of his own shortcomings and the ambition of others.
If you’re detecting the odour of allegory, you’re on the money.
Read more »
Posted by David Zampatti at 9:52 AM No comments: