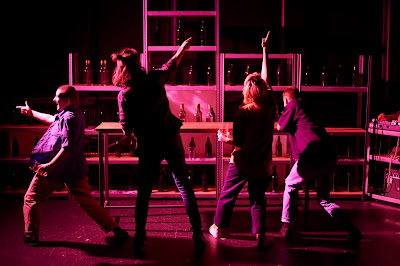 My Shout is a snappy, even-handed trip through the jungle of social and antisocial drinking. It makes no excuses for its excesses, and doesn’t dismiss its pleasures.

That makes it both frank and restrained – a high-wire act that’s not easy to achieve in dealing with something so dear to (most of) our hearts but so damaging to it and many of our other organs.

That’s not surprising, as the performers are all graduates of WAAPA’s excellent Theatre Making course, and they put their wide-ranging talents and training to the best possible use here.

During their customary weekend ceremony, from footy-watching first beers to drinking games at midnight and dueling shots at dawn, they run the gamut from euphoria to morose emptiness, from playfulness to sombre introversion.

Scarlett, sober after three months off the grog, a little detached and a whole lot more observant, acts as a kind of travel guide for their journey, Kris plays along, Sean is in boots and all and self-destructive, and Clare – well she’s something else.

Two routines Appleby features in, one a supercharged choreography that ends with some table-top skollery, another a frenetic karaoke of The Champs’ Tequila, are memorably hilarious (don’t try either at home kids).

They are among many ensemble sequences that punctuate the show, giving it a structure very like a musical; for this the work of the fifth cast member, the musician David Stewart, whose electric guitar and tech-driven sound bed is crucial and outstanding.

Director Samuel Gordon Bruce has a fine eye for the placement of action in the small Blue Room space, and the effects he and the ensemble create often seem much bigger than the forces at their disposal.

My Shout is a cracking show; it’s a spritzy entertainment spiked with a lot worth saying. You should try a glass of it.

Posted by David Zampatti at 8:05 AM No comments:

There’s a easy trap for critics, when confronted with a work like Unbound, to write a thesis rather than a review, especially when present day political and intellectual issues and stances collude or collide with works of art from other times (here’s a recent example: www.seesawmag.com.au/2021/07/is-it-time-to-retire-west-side-story).

It’s not my practice to buy into these arguments, unless the work demands it by how it’s been adapted.

I will, though, say my piece about William Shakespeare and his female characters, whose words, if not their personages, are at the heart of Unbound.

The late Harold Bloom, in his magnum opus Shakespeare: The Invention of the Human, argues that the playwright was more interested in character than action, and in that pursuit, created many of the most memorable women in all literature. Rosalind, Cleopatra, Juliet, Portia, Lady Macbeth – these are only some notable examples – are vivid, powerful figures capable of leading their circumstances, and often their play’s male characters, by the force of their personality.

I’m not sure any other writer – certainly any other male writer – has peopled their work with so many, so compelling and complete, women.

So, with that said, I approached Unbound not as a critique of Shakespeare but as a piece using his work and words to create a perspective on feminism and the patriarchy.

Their technique, the cut-up method, was codified by the American writer William S Burroughs and famously adopted by David Bowie. It simply involves cutting phrases, sentences and passages from existing work and pasting them either at random or with judicious editing, to create a new, even if familiar, work.

The devisors of Unbound, Bridget Le May, Gala Shevtsov, Hannah Evelyn, Hock Edwards, Kynan Hughes and Ryan Marano, have plenty to work with – the complete works of Shakespeare (they say only one play, King John, is missing from the free-for-all).

The first act, The Kingdom, tells the story of three royal sisters struggling for what is rightfully theirs and mere survival, against the machinations and violence of the men around them.

For convenience they take the names of famous Shakespearean characters, Ophelia (Evelyn), Hamlet (Edwards), Emilia (Shevtsov), Iago (Marano) and Volumnia (Le May), but their words and actions are drawn from across the plays.

It’s a striking dramatic effect, well supported by some stylish costuming (by Hughes) and set design (by Le May), but it struggles with tempo and clarity.

Overburdened with high passion and intensity, the dialogue’s temperature is feverish, and the narrative melts in its heat.

The second Act, The Forest, is a much shorter, slighter creation, but in some ways more successful. In large part a dance that weaves through torrents of falling paper petals (the device used to create the effect was quite something), it was pretty, nicely devised and, after the sound and fury of the first act, it was something of a relief that it signified nothing.

Posted by David Zampatti at 1:15 PM No comments: