Warnings: City of Gold contains deeply offensive and racist language that this review draws your attention to but will not repeat. Indigenous readers are advised that this review contains the names of people who have died.

Art is a ripple on the surface of deep waters of oppression and injustice that radiates out from a particular tragedy and makes us aware of others that lie beneath the surface.

The most striking example in Western Australia is the body of work arising from the 1984 death in custody of John Pat in Roebourne, most notably the extraordinary Hipbone Sticking Out. The 1834 massacre of Noongar men, women and children by Governor James Stirling, dramatised in Bindjareb Pinjarra, reminds us of the genocidal treatment of the state’s First People.

In 2016, the prominent Wongutha-Yamatji stage and screen actor, Meyne Wyatt (Redfern Now, Neighbours, Mystery Road, The Sapphires), was mourning his father’s death from cancer when the killing of a young relative, Elijah Doughty, and the subsequent acquittal of the man responsible for his death compelled him to speak out.

In City of Gold, an actor, Breythe Black (Wyatt), storms off the set of a risible Australia Day lamb commercial, partly in frustration at his cardboard-cut-out part in its “Change the Date” script, and because his dad had died at home in Kalgoorlie. Back in Kal, Breythe shares his grief with his brother Matao (Mathew Cooper), sister Carina (Simone Detourbet) and deaf, vulnerable cousin, Cliffhanger (Ian Michael).

And there’s the dark undertow of the old mining town, its overt and covert racism, the insults and intimidation, the constant threat of violence and the possibility of tragedy lurking with every interaction between Indigenous people and the police.

The result is an outpouring of grief, rage and frustration, both personalising and generalising the outrage Wyatt feels and sees. The story of Wyatt’s family’s life inform the play, but its message extends to the experience of all Indigenous people in this country.

The narrative of City of Gold is very often a vehicle for Wyatt’s polemic, for which purpose the action frequently stops dead in its tracks.

One of those dramatic roadblocks does provide the play’s most memorable scene: the celebrated, impassioned monologue – sometimes beat poetry, sometimes rap ­– about an individual’s place in a world that demands the conformity and “niceness” against which Breythe revolts.

Less effective is an extended dialogue between Breythe and his brother, a litany of grievances and accusations that, while legitimate in themselves, break the first, best rule of theatre – that it should show, not just tell, how the world wags. That whole long scene could be cut without any damage to the play’s message or force.

City of Gold’s other essential difficulty is its dramatic chronology. Its action takes place in scenes that, to quote Kurt Vonnegut, have become “unstuck in time”.

Looping back and forwards in time is a device that can be effectively used to preserve the impact of the crisis of a play, even if that crisis actually occurs quite early in the piece.

But, in City of Gold, the resulting narrative was so confused that I confess to not knowing when that crisis, or many of the other scenes, occurred (an uncertainty shared by many audience members I spoke to afterwards).

Having said that, many of the scenes are powerful and effective, especially those between Breythe and his dead father (Trevor Ryan), and those featuring Carina, who has many burdens to carry, not least because of her cantankerous brothers.

There’s a sweetly engaging performance by the gifted Michael as Cliffhanger, and Myles Pollard and St John Cowcher effectively portray characters from the laughably incompetent advertising director to a craven, perilous policeman.

The creative team, led by director Shari Sebbens (who performed alongside Wyatt and Cooper in the original STC/QTC production in 2019), produces work of high quality. Tyler Hill’s skeletal homestead, placed diagonally on the stage, allows for memorable effects and efficient staging, while Rachael Dease’s original compositions are exquisite, especially the ascending, pulsating music that accompany and help drive Wyatt’s second-act monologue.
City of Gold is shot through with broad humour and pain, tenderness and brutality, and wisdom in the face of ignorance and stupidity, though it lacks the dramatic rigour and clarity that would give its raw, urgent truths all the power they deserve.

Posted by David Zampatti at 7:39 AM No comments:

Theatre: It's Dark Outside

The Last Great Hunt's It's Dark Outside returns for a season at the STC Studio from March 16 - April 2. This review is adapted from that of its original 2012 season. 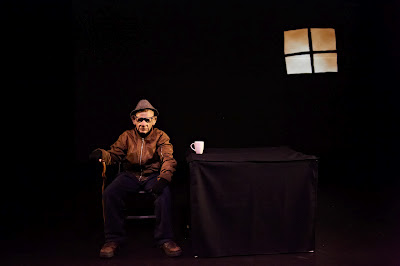 As our lives extend, the manifestations of our long declines come from the shadows. Dementia, Alzheimer’s, memory loss, sundowning syndrome (the specific subject of this play) are fearsome, insidious blights on so many lives.

The team of Tim Watts, Arielle Gray and Chris Isaacs tackle these demons head on in It’s Dark Outside, and the result is a rare triumph of theatrical ingenuity and human compassion.

An old man (Gray performs behind the mask) gingerly takes his seat and gropes for a mug of tea that, inexplicably, isn’t where he thought he left it. It breaks on the floor, and he tries to drink from its shards. The sun is going down, and his connection with present reality is setting with it.

In the gloom, he goes wandering, and strange and wonderful things happen. His landscape becomes the wild west of his youthful imagination, a tent becomes his horse, a cloud his dog. His steps are followed by a moon shadow, a dark shape with a butterfly net. Is it death and oblivion, or is it his memory of himself as a boy?

When he rises from the tent of his dreams on the “Zs” of sleep, while a music box tinkles Somewhere Over the Rainbow, the stars are brilliant tears. The music in his head forms into a song, the only words in the play: “I’ll be your light/ when it’s dark outside”. It’s ineffably sad, and deeply, gently, moving.

I must emphasise what a thrilling entertainment this is, because I’d hate you to be discouraged by its sombre subject matter. Watts and his colleagues play in the theatre of ideas, and they stand or fall on their inventiveness. It’s Dark Outside has a dazzling multitude of both. The cloud dog is a superbly created delight; a dance to Peggy Lee’s I Love Being Here With You so sweet and sly it drew spontaneous applause from the audience. So often, if it weren’t so sad, it would be easy to laugh at the quirky brilliance of it all.

None of this will surprise anyone who saw Watts and co’s hugely successful Adventures of Alvin Sputnik. Their ability to play with shapes, sizes, silhouettes and sound effects remains just as impressive, but It’s Dark Outside is a much more coherent and powerful piece than its predecessor. The tenderness with which the performers manipulate their puppets and the eloquence of their wordless text is simply outstanding, while Rachael Dease’s lovely music and Anthony Watts’s memorable sets and gadgetry contribute greatly to the play’s achievement.

There’s a touch of genius about The Last Great Hunt's work, and it’s on display in this, a highlight of the Perth stage over the past decade.
Posted by David Zampatti at 7:00 AM No comments: