The Curious Incident of the Dog in the Night-Time (★★★★½) 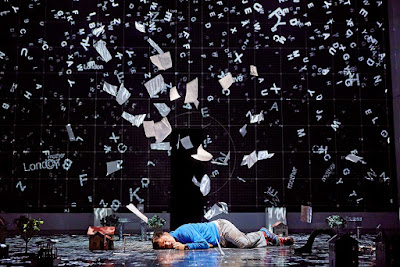 All serious theatre is an exploration of the human mind and its mysteries, and good theatre attempts to illuminate, but not explain, it and them.
Explanation is a task for lectures, illumination for the stage.
That’s what makes Simon Stephen’s The Curious Incident of the Dog in the Night-Time among the best of plays.
It’s the story, adapted from Mark Haddon’s much-loved novel, of a courageous 15-year-old, Christopher Boone (Kaffe Keating), who triumphs over the weaknesses and deceits of his parents (Stuart Laing and Emma Beattie) and the terrors of loneliness and alone-ness to achieve what seems an impossible goal, and at least begin to repair the mess those around him have made.
This is as fine, entertaining and insightful a couple of hours as I can imagine, and it would be curious of you to miss it.

Read the complete review in The West Australian
Posted by David Zampatti at 4:19 PM No comments:

Email ThisBlogThis!Share to TwitterShare to FacebookShare to Pinterest
Labels: His Majesty's Theatre, The Curious Incident of the Dog in the Night-Time

Julius Caesar is a problematic play, and this is a problematic staging of it.
I’m not quite sure why Bell Shakespeare have taken it out on the road so soon (seven years) after they last mounted it, and I couldn’t find anything in particular compelling about it to have forced their hand.
Whether we’re to make anything of its extensive gender and ethnic impartiality (five of the historical and original male characters are played by women; Caesar by an African American), there’s nothing especially ground-breaking about it – indeed a major “drawcard” of Bell’s last crack at Caesar was the casting of Kate Mulvany, who also delivered a terse, concertinaed adaptation of the script, as Cassius.
Which leaves us with the problems of the play, and how Bell dealt with them, and it’s a mixed report card.
The elephant in the room (okay, allow me a little Hannibal joke) is Julius himself. The play is mistitled, of course – it should be Antony and Brutus, but Shakespeare obviously was saving the latter part of the title for Cleopatra. Julius is, after all, merely the victim of the play’s pivotal moment, and that happens fairly early on in the piece.
Before it, he does nothing other than ignore some ultimately good advice, change his mind a couple of times (so much for being “as constant as the northern star”) and wander into a one-way knife event.
He’s barely more important, either to his play or the parade of Shakespeare’s characters, than Duncan in Macbeth, and no-one has ever thought to re-name the Scottish Play after him.
Bell’s last Caesar, Alex Menglet, played him like an ailing Russian oligarch, which was a bit comic but made some useful points about the unsuitability of any individual to claim the entire apparatus of a modern state for themselves.
I could find no similarly useful points in Kenneth Ransome’s awkward portrayal of the general who  would be king.
On the other hand, Sara Zwangobani’s Mark Antony did bring something to her role. She stripped Antony’s great “friends, Romans, countrymen” of much of its rhetorical flourish and left it as the prowling, snarling incitement to slaughter it is.
Perhaps the production’s best – and most surprising – moment was the argument and reconciliation between the conspirators Brutus (Ivan Donato) and Cassius (Nick Simpson-Deeks) in IV.iii. They squabble and flatter each other like the doomed children they are while the pincers of the vengeful Antony and ambitious Octavius (Emily Havea, effective as a Prince on the cusp of her purple reign) close in on them.
From the end of Antony’s speech on, the playing out of Julius Caesar is as weakly constructed and written as anything in Shakespeare.
To their credit, Donato and Simpson-Deeks at least made it worth sitting through.
Posted by David Zampatti at 4:05 PM No comments: