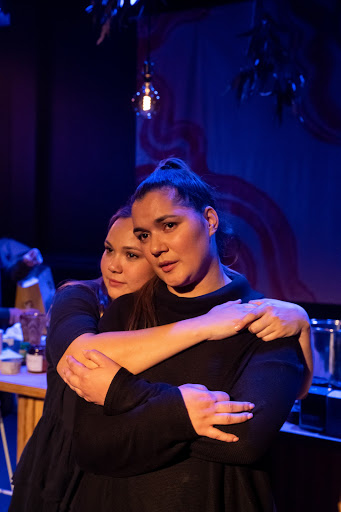 One of the greatest strengths of the Blue Room Theatre and its circle of independent producers and artists has been telling the stories of young adults and their contemporary, West Australian, domestic lives.

Those stories have a realism and relevance that make them both important and compelling.

They also offer great opportunities for young actors, directors and creatives to deal with subject matters they know and understand, resulting in many of the best performances we’ve seen on the Perth stage.

We are also fortunate that more and more work about life and issues by First Peoples artists is being presented on our stages. These stories, too, are real, relevant, important, compelling – and strong.

Posted by David Zampatti at 3:03 PM No comments: 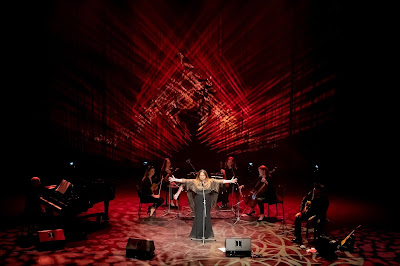 Nothing about human beings is more fascinating and revealing than language. Our evolution, the way we think and act, the way we view the world and understand ourselves, is told in our words.

A dozen millenia ago, there were many thousands of independent human worlds scattered around the globe, each only dimly aware, if at all, of others apart from their immediate neighbours. Each with its own language.
Four thousand years ago, as hunter gathering gave way to agriculture (the “Greatest Fraud” according to the historian Yuval Noah Harari) and the first territorial empires arose, those  worlds had dwindled to a few thousand at most, and, by six centuries ago, most of the people on earth, ninety per cent or so, had assimilated into the vast world of Afro-Asia, with its imperial and nation states, interconnectedness and relatively few languages.

Only in Meso and Andean America, Oceania and Australia were smaller worlds and their languages found. Over the next three centuries they, too, were swallowed by the giant world order.

What has this little history lecture got to do with the opening night of the inaugural Perth International Cabaret Festival? If you were at His Majesty’s Theatre for the wonderful Koorlangka Reimagined by Gina Williams and Guy Ghouse, I think you might know the answer.

Why has the first language of the land of the Noongar Whadjuk people survived, and why does it now enjoy a nascent renaissance in the face of oppression and neglect, the vast tide of the modern world that overwhelmed the small, ancient worlds in its path?

It’s partly because it had thrived for so long, become so deeply imbedded in country, that its deep roots could withstand, if barely, the fires of colonialism and the floods of world culture.

It’s partly because of the dedication and determination of people who kept it alive in their families and through their music and words.

But it seems to me it’s also because, notable among the world’s languages, it is a beautiful tongue, gentle and expressive, musical and full of humour and wisdom. There is a compelling, aesthetic reason for its existence quite distinct from its importance as the language of a continuing people.

I think that’s why the Welcome to Countries before many events have evolved from essentially an acknowledgement of our Indigenous communities and their custodianship of the country they hold to much-anticipated performances in their own right, given with increasing complexity and confidence (Walter McGuire’s witty and wise welcome before Koorlangka was a perfect example).

And it’s a huge part of the force of Koorlangka, Williams and Ghouse’s song cycle of family and nature.
Many, like the title song, Ngoonyoong Nindjan (Darling Child) and Djinda Djinda (Twinkle, Twinkle Little Star) are lullabies, others celebrate the natural world surrounding them, - Bindi Bindi (the butterfly) and Gitty Gitty (the willy-wagtail).

Songs in Noongar language transposed into English, and vice-versa (Moon River) show that Williams is a transcendent artist in any language, and her friend and collaborator Guy Ghouse’s generous, serene presence and fingerstyle acoustic guitar playing (often reminiscent of James Taylor, with the thumb taking the place of a pianists left hand) is a show in itself. The supporting ensemble, Russell Holmes on piano and the Dolce Ensemble’s strings add further depth and beauty to the songs, and also the cross-cultural context that enhances the universality of Williams and Ghouse’s artistry.

There’s much more to be said about Koorlangka, and my Seesaw Magazine colleague Bourby Webster does it perfectly (read her review of a 2020 performance here).

Koorlangka is a lovely, warm, even inspiring, experience – I urge you to listen to its songs (easily found on-line, and there is a cd available) and see it live when next it comes to country near you.

Posted by David Zampatti at 11:50 AM No comments:

The Rechabite until June 20

When Marcus Canning, of Fringe World fame, brought the old Rechabite Hall on William Street back to life at the beginning of 2020 there were things neither he, nor we, knew were about to happen.

He didn’t know that the venue would be all but closed through the guts of the following year, and certainly unable to put an entertainment programme together in 2020.

What we didn’t know was what it would be like.

We’ve got a better (though not complete) idea now with the release of the Rechabite’s season for June and July, Chasing Rainbows.

It’s a mix of circus cabaret, comedy and live music in the main hall and downstairs club, dovetailing with the eatery and three bars over the venue’s four stories.

Unsurprisingly, the spirit of fringe abounds throughout, even if Chasing Rainbows is not exactly fringe at its most eclectic and challenging; but any single venue you could walk into at 5pm and pour yourself out of (responsibly of course) at midnight, having been generously fed, watered and entertained along the journey is worth having. You should try it soon.

Nothing better demonstrates the idea of Chasing Rainbows than its star attraction, the return of Head First Acrobats and their 2019 Fringe World smash, Railed.

It’s easy to see why the show pulls a crowd, and the crowd it pulls. It’s a heady mix of hen’s night tease and cleverly constructed acrobatics heavy on visual appeal if not, necessarily, high on degree of difficulty.

There’s absolutely nothing new in the routines, a straight- forward mix of strength acts, balancing, juggling and aerial work, mixed in with some neatly devised slapstick humour and much nodding and winking. If you’ve seen a bit of circus cabaret, you’ve seen it all.

But, hey, that’s not a bad thing. This is a night out show, and there was plenty of whoopin’ and hollerin’ in the audience as the trapeze artist Thomas Gorman, the juggler Louis Biggs, the acrobat Louis Biggs and strong man and balance artist Callan Harris plied their trade.

Harris is quite a specimen, and clearly the crowd favourite if the enthusiasm of the delightful and delighted posse of hens-nighters next to me were any gauge (I heard Chris Helmsey’s name bandied about sotto voce between the girls as he strutted his stuff).

While his big finale (pictured) owes more to precise carpentry than extraordinary athleticism and derring-do, it’s guaranteed to raise the roof.

Which it did – and which is all that needs to be said about Railed.

Posted by David Zampatti at 12:33 PM No comments:

Unlike my friend and colleague Nina Levy, whose review of Sally Davies and Anna Lindstedt’s Ugly Virgins is up on Seesaw Magazine (read here), I’ve never strapped wheels to my feet and attempted to roll around on them.

As a child, however, every Sunday afternoon I was transfixed by the Roller Game, where the transported (from the US), rebadged Australian (formerly LA) Thunderbirds, led by the immortal Ralphie Valladares and tough-as-nails women likeTerri Lynch and Ann Calvello nearly always beat off the challenge of their opponents, most notably the brutish, black-uniformed Texas Outlaws, building a substantial TV and live audience around ’60s Australia.

But the craze died, the audiences fell away, and some corporate shenanigans back in the US dealt it a death blow.

It’s spirit lives on, though, in amateur, almost entirely women’s, Roller Derby teams and leagues in Australia and around the world; played on a flat track rather than the banked track of the professional (often staged) Roller Game, it’s edged towards Olympic recognition while maintaining its punk, outlaw stance.

The Perth Roller Derby has three teams, The Mistresses of Mayhem, The Bloody Sundaes and The Apocalipstiks, whose colourful names are matched by the nom de geurres of their players.

It’s this little world, with its jammers and blockers, fierce tribalism, finesse and brutality, that Davies and Lindstedt have used to represent their story of rejection and acceptance, loneliness and companionship, camaraderie, betrayal, remorse and forgiveness.

Three experienced skaters, Mad Splatter (Katie McAllister) Nutcracker (Courtney Cavallaro) and Cinnamon Roller (Danielle Antaki) find themselves ostracized from the fictional Purple Minions, but are determined to get back into the game. They set up an ad hoc training venue, and are joined by an artistic roller-skater keen to try the derby who, tentatively, calls herself Large Gunderson (Amber Kitney), and a complete novice, Huntswoman (Mikayla Merks).

Each has their own reason for being there, each has setbacks and heartbreaks to deal with. Each has to overcome their own façade, just as much as those of the others, to connect.

These are universal human issues, and Davies and Lindstedt (who also co-direct) deal with them with a light touch, exploring them without allowing them to derail the narrative.

Their creative team, production designer Eilish Campbell, lighting designer Rhiannon Petersen and the sound designers/composers Alex and Yell (and how good to hear the soundtrack’s signature piece, Kate Bush’s skate-worthy Running Up That Hill played in full and loud) work effectively in the minimalist space.

They’ve also recruited the support of the dramaturg Alexa Taylor and directing mentor Emily Mclean, whose work contributes further polish to the text and it’s staging, as well as the skating trainer Wheels McCoy, who keeps things pretty much upright throughout.

The show is cast extremely well. The real life age range of skaters is well represented in the cast, and their performances are genuine, well pitched and persuasive.

And they can skate – if not exactly well, at least well enough!

Posted by David Zampatti at 12:09 PM No comments: