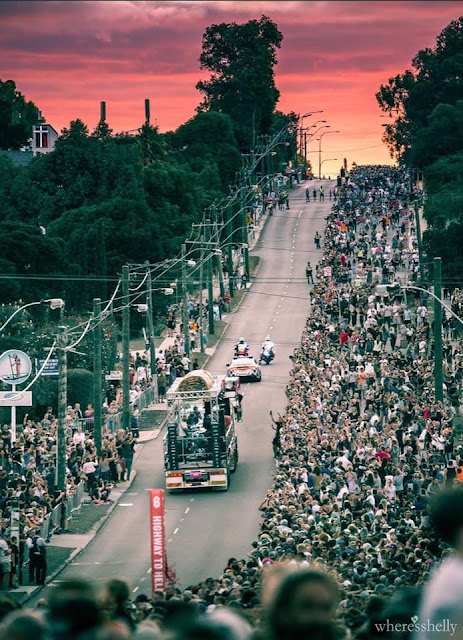 Link here to my review in Seesaw
Posted by David Zampatti at 3:25 PM 2 comments:

There’s a striking coincidence at the very beginning of this Black Swan /Malthouse revival of the celebrated novel-turned-stage play-turned-mini-series Cloudstreet which closes the 2020 Perth Festival’s theatre programme.
The opening scene, in which the unmistakable, cherubic actor Ian Michael stands alone on the stage introducing the where, when and whys of the play about to take place, is an exact replica – same unmistakable actor, same purpose – as the opening scene of Black Swan’s 2019 Perth Festival production of Thornton Wilder’s Our Town.
It’s more than a passing coincidence; both the Australian and American plays deal in a specific place (the small, isolated town of Grover’s Corners in Our Town, the small, isolated city of Perth in Cloudstreet), a long space of time (13 years from 1901 – 1914 in our Town; 20 years from 1943 – 1963 in Cloudstreet), and are peopled by families growing cheek to jowl through births, deaths and marriages.
Very significantly, both works were written around the same number of years after the events they portray (24 years in the case of Our Town, 28 years in the case of Cloudstreet); recently enough for both Wilder and Winton to have a personal connection to the time, the place and the people, long enough ago for them to become part of a wider, more unparticular history.
I think this partly explains the real life/dreamlike quality that pervades both works, and their enduring popularity.
Put more succinctly. If Winton had called his story Our Town, it wouldn’t seem a millimeter out of place on the book cover.
We will never see Our Town in Wilder’s invented Grover’s Corner, but we are seeing Cloudstreet on its own boodjar, and that gives it an additional power that is as palpable as it is obvious.
We see immediately, though, that Malthouse Theatre’s artistic director, the Perth-born-and-raised Matthew Dutton has no intention of giving this revival of Nick Enright and Justin Monjo stage adaptation of Winton’s novel a picaresque, soft-focused treatment.
The clue is Zoe Atkinson’s concrete brutalist set, gouged with abstracted shapes that hint at Aboriginal rock paintings. There’s a pertinent nod, though, to Perth’s brutalist architects, notably Tony Dale, whose Hale School Hall (1961) is the touchstone of the style in Australia; other examples are the Commonwealth Bank building on the Terrace, the Concert Hall and State Library, the Christian Scientist building at the top of the Terrace and the FESA building, disgracefully demolished in 2013 .
But while the set may be nothing like how we imagine the interior of 1 Cloud Street, it functions well as the shared home of its now legendary cohabitants, the Pickles and the Lambs,.
Their members have passed into a kind of folklore: the soft-touchable, good-hearted Lester Lamb (Greg Stone) and his guilt-ridden, pious wife Oriel (Alison Whyte), their boys, the fervent, melancholy Quick (Keegan Joyce), the lovable, damaged Fish (Benjamin Oakes) and Chub (Michael), their daughters Elaine (Arielle Gray), Hattie (Ebony McGuire) and Red (Mikayla Merks); and their accidental landlords, the Pickles – the woebegone rider of lady luck, Sam (Bert LaBonté), his dipsomaniac – just about every kind of maniac ­– wife, Dolly (Natasha Herbert), their bright, anorexic daughter Rose (Brenna Harding) and their sons, the saturnine, disconnected Ted (Scott Sheridan) and the impetuous Lon (Michael again).
The familiar story of the Lambs and the Pickles, from their first arrival at Cloudstreet in the latter years of WWII to – the play strongly suggests – the dawn of a new era in the early ’60s, plays out over 225 minutes (there are two intervals, the first long enough for a meal).
It’s a long haul, and even then inevitably truncates some of the book’s major themes and incidents, and it’s unsurprising that there’s an occasional sense of ticking off the necessary rather than diving deep into the essential – rather like those Reader’s Digest condensed novels of the time.
By and large, though, the adapters Nick Enright and Justin Monjo did a neat editing job with a practiced eye for what was going to work on stage, so you don’t feel you’ve missed anything, even if, sometimes, there might have been more to be had.
There has been discussion about the heightened Aboriginal presence in this production, creating a darkly spiritual sub-soil from which the story grows.
It’s a conversation worth having, but it’s an element that Enright and Monjo, and now Lutton, have drawn and amplified from the original novel. Without it the play would lose a unifying theme it badly needs to elevate it from the mere episodic.
It needs a strong, durable cast, too, and Lutton is blessed with a fine one here.
There’s not a weak performance, but the central characters are particularly well served by Joyce’s nervy Quick, Whyte’s sharp-edged Oriel and Harding’s blossoming Rose.
The production’s cross-ethnic casting is no issue, and I’ll defer to those much closer to the matter about the casting of the autistic actor Oakes, who does a fine job as the brain-damaged Fish.
Cloudstreet has an almost genetic fascination for West Australians  (“Tim Winton must have heard about our family” is all but a meme in these parts) so, although the play is never going to be a great one – it really is too episodic, too stuck in its ways to be that – this production is worthy of your attention.