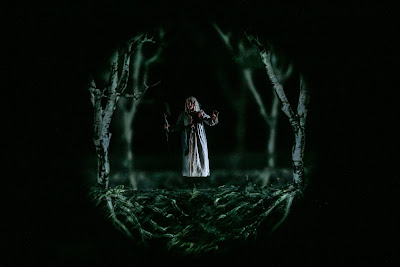 Late in I’m a Phoenix, Bitch, its writer and performer Bryony Kimmings clambers up a 4m-high structure representing a steep hill to place a model of an old cottage on its summit.
Such was the commitment and power of her performance, such were the dangers she faced down to tell her story, and such was the shock her telling it had caused the audience (I’m absolutely confident I speak for everyone in it) that if she had fallen headlong down it, cracking her skull against its side, and lay, crumpled and shuddering, on the floor, we may not have rushed immediately to her aid for fear we would be interrupting her performance.
In another scene, Kimmings stands behind a scrim in a glade and begins digging. In a wondrous projected animation (by Will Duke), her excavation becomes a plunge through the earth and down into that cottage, which burst into flames around her, threatening to consume her until rising waters extinguished them, and drowned her.
We have just been taken inside a nightmare. Live on stage.
The nightmare Kimmings takes us into began soon after her last visit to Perth, in early 2015, where her Sex Idiot was the sensation of that year’s Fringe. She also performed a show, Fake It till you Make It, with her then partner, Tim Grayburn, who suffers from suicidal depression. It was scary, brave and warm – unusual theatre (Tim has no acting experience or particular aptitude for it), but humane and memorable.
By August that year, Kimmings was visibly pregnant as she and Tim performed Fake It in the UK. And that’s pretty much where Phoenix begins.
They rent an old cottage in Oxfordshire, on the banks of an innocent-looking little stream that, the estate agent warns them, can flood and cut the cottage off for weeks. But they’re in love, there’s a baby coming, Kimmings can get on with her writing if they’re stranded, so it’s all going to be just fine.
Little Frank is born in November 2015. Suddenly, Kimmings finds herself in the maw of a cataclysm. The baby is diagnosed with West syndrome, a rare, severe form of infantile epilepsy with pitiable symptoms, little response to treatment and an extremely poor prognosis. Tim and Kimmings’ relationship collapses under the strain, she suffers acute postnatal depression.
Kimmings is terrified, devastated, alone. But she is physically strong, crazy-brave and resilient. She’s too emotionally receptive not to be taken by the flood, but too robust and courageous to drown in it.
She is also an exemplary artist. So, by late 2018, when she is finally able, ready and willing to do it, Kimmings the artist brought Bryony the person to the stage; the result is as devastating a theatre work as I can recall.
Much of it is due to Kimmings’ natural inclination to savage comedy and her innate theatricality. The opening scenes are superbly devised sketches of gender role playing, the acquiescent female, the judgmental male, the jungle line behind the make-up and mascara, the aprons and window boxes, the round hole into which a round peg like Kimmings is both drawn and abhors.
It’s Sex Idiot redux, and we’re up for its parry and thrust, its laughter and spark.
But nothing prepares us for Kimmings’ descent, and she spares herself, or us, nothing down there. Early, when she tells us that we’re safe and everything’s okay, they aren’t empty words, and she’s not fishing for compliments. She’s aware enough of what she’s about to do, and we’re about to see, that she needs to reassure us – and, I suspect, herself.
The technical achievement and stagecraft of the show are remarkable. Its director, Kirsty Housley, whose work on Tao of Glass upstairs in the Heath Ledger Theatre is also inspiring, is a great gift to this festival. Art director David Curtis-Ring, composer Tom Parkinson and the design team all work wonders. And Kimmings, who is clearly spent at show’s end, is just amazing.
Many people in the audience took their time leaving their seats (Kimmings gave us permission to stay if we needed to). Outside the theatre I hugged someone I know who’d seen the show the night before. My wife hugged me when I got home. The dog jumped on the bed and stayed close.
We are safe. It’s okay.
And though we have no right to know the pain and grief and terror that Bryony went through in 2016, I’m eternally grateful to Kimmings for having the strength and daring to share it with us.