Presented by the MS Society
Directed by John Senczuk

Musical director Tim Cunniffe
Featuring Ian Toyne, Michael Loney, Charlotte Devenport, Jenny McNae, Michael Bingaman, Thomas Papathanassiou and Mahalia Bowles, Maree Cole, Carley Illingworth-Wilcox and Sam Tye, with Tim Cunniffe and Mia Brine on keyboards
Playhouse Theatre
16 – 23 December 2010
Oh yes I did!
The venerable Playhouse Theatre is going out not with a bang but a whisker.
In a nice touch, the partnership between the Multiple Sclerosis Society of WA and director John Senczuk has revived the Christmas pantomime for the theatre’s swansong.
This Playhouse tradition was driven by Perth theatre legend Edgar Metcalfe during his tenure at the helm of the long-gone National Theatre Company.
While Puss in Boots is hardly a grand finale, it has something of the family feel that gave the Playhouse — surely the most unprepossessing and prosaic major city theatre ever foisted on the public — whatever charm it had.
And “family” is what Senczuk’s adaptation of this pantomime standard tale is all about.
Sure there’s the usual smattering of double-entendres and scatological merrymaking, but this is squarely a show for kids with a bit of over-their-heads smuttery thrown in for their mums and dads.
It’s not quite the whole hog as pantomimes go: the only gender-bending on show is the inevitable dame (in this version, Queenie Cupcakes, a widow of Dalkeith), and the intricate call-and-audience response of the classic pantomime experience is simplified down to the classic “She’s behind you!” and a couple of chants and waves.
But let’s not quibble; it was all perfectly targeted for the kids in the audience, and they responded sensationally.
I don’t know what they’re teaching kids in school these days, but these ones were sharp, responsive and connected to the entertainment in a way that the diffident, surly urchins of my generation would never have been. Big cartoon hats off to them.
Hats off, too, to the three old pros in the cast, Michael Loney, Jenny McNae and Ian Toyne, who nudged, winked, blustered and farted their way through routines as old as the hills and funny as a barrel of monkeys.
The glorious Jenny McNae deserves a statue on the site of the theatre she’s called home for most of its 54 years, and anyone who’s called the hilarious Michael Loney a bit of an old tart over the years will have plenty to smile about when they see him playing one. And let's hear it for Ian Toyne, who does a lot of the bits and pieces, from the MC to the most gaseous gazillionaire in living memory, and does them all well.
The juvenile leads, Charlotte Devenport (who is every bit her talented mother's daughter), Michael Bingaman and Thomas Papathanassiou, as the title character, were left a little stranded playing their own gender and by a lack of farcical energy and broad humour in the true-love story that passes for a plot in panto.
But they are attractive, talented young performers whom we’ll see again.
Tim Cunniffe is a master of stage music on the cheap – in this case just him and Mia Brine on keyboards – and, as usual, he delivers a swag of fun songs, nicely crafted.
It all comes to an end on Thursday when, I understand, there’s likely to be a host of cameos from Perth theatre luminaries to sing the old girl home (“She’s behind you!”).
If you can find a ticket and a hanky, you should be there.


An edited version of this review appeared in The West Australian on 20.12.10 read here .
Posted by David Zampatti at 1:50 PM No comments: 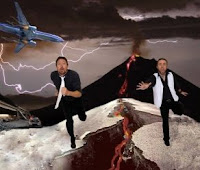 As the Moon, adrift from its orbit, plummets toward the helpless Earth, the discredited scientist Derwent Silverman and his nemesis Sheldon Monsanto are holed up in the magnetic crater. The bodies of Silverman's high school sweetheart Chardonnay, his old friend Brett Baguette, the ominous Colonel Ivan Nokabolokov, little Alice and the Mexican amigos Pablo and Lupé lie broken around them.
Only they, and the faithful mutt Rufus, can save the world, and then only if Silverman can hurl a block of parmesan cheese at the approaching satellite. He swings a giant kitchen spoon, the cheese crashes into the lunar surface and the gigantic threat is averted.
We are saved! Rufus barks happily.
Sadly, you’ll never see this story told again, but Sam Longley and Damon Lockwood, who concocted it, contend you’ve seen it all before – every time you watch that most mongrel of Hollywood genres, the disaster movie.
And they go about proving their point cleverly, first improvising a story based on a disaster movie theme selected by the spin of a chocolate wheel from 20 published in the program. Ours – you guessed it – was “Falling Moon”; not so lucky audiences might get “Dugong v Panda” or that hoary old staple “Thinking, Flying, Heat Resistant Hail”.
The story unfolds, with characters named by the audience and consistent with what Longley and Lockwood claim are the Seven Rules of a Disaster Movie, which range from “everything can be fixed with dodgy science” to “the dog never dies” (good boy, Rufus).
While this is happening, the third member of the crew, director of photography Aaron McCann, is filming the scenes and inserting cut-aways and close ups of action on improbable miniature sets. The purpose of all this activity becomes clear when we return after interval and watch the movie we’ve just seen made. It’s a clever and original touch, and ticks a lot of good comedic boxes without overstaying its welcome.
Both Longley and Lockwood are charismatic and engaging comedians very much in the Chaser mould, and the tiny Blue Room space is perfect for a show that’s not far removed from a party piece.
It is, after all, summer in Perth and this sort of neo-panto is well suited to nights when you’re probably more inclined to be thinking of the bar than the Bard.
I’m not for a minute suggesting that D.I.Y. Disaster Movie is either great art or even great comedy; like a lot of full-length improv, it’s too scratchy and adolescent for that. And I’m certainly not suggesting it’s going to change the world.
Unless, of course, Derwent Silverman’s piece of cheese misses the Moon!
An edited version of this review appeared in The West Australian 3.12.10
Posted by David Zampatti at 8:55 AM No comments: