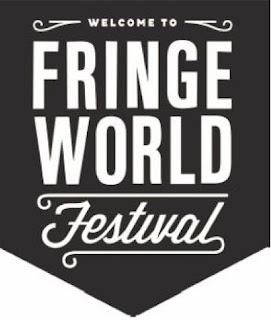 Here we go again! Welcome to Turnstile's run-down of the shows we've seen at Fringe World 2020.
These spot reviews will often link to full pieces either on Turnstiles or Seesaw Magazine. Shows that you can still see come first, those whose runs have finished follow.
I hope that all makes sense, and that what you're reading here helps you make some of those tricky "will-I-or-won't-I" fringe choices.

Girl's School until Feb 16.
Whether of not you like that bruising caterwaul of an instrument, the Great Highland Bagpipe, you'll love David Colvin's semi-autobiographical story of a boy who grew up in its thrall, and the flawed genius who inspired him. Comes complete with a deliciously obscene Princess Di story.
Link here to my review in Seesaw

Girl's School until Feb 16.
May 8, 1938 is a special day for the occupants of an apartment building in Rome as Adolf Hitler rolls into town to meet Benito Mussolini. It will be a special hour for you if you see this lovely, superbly performed and inventive play from Mexico.
Link here to my review in Seesaw

Bernie Dieter's Little Death Club ★★★★½
WA Spiegeltent until Feb 16.
Since an infamous night in 2013 when Bernie Dieter aka Bernadette Byrne aka Jennifer Byrne from Koln via London via Warrandyte (it's true - she's just a suburban girl!) sat on my lap in a spiegeltent and  crooned something torchy in my reddening ear, I've been a helpless acolyte, drawn like a moth to the flame of her fabulous showvampship.
This new show is the apotheosis of her talent, as a performer, and as an empressario. Unlike the previous, gloriously filthy but a little rag-tag LDC, this show is as tight as a drag queen's leopard-skin cheongsam. (the drag queen in question is Art Simone, the RuPaul Drag Con "Performer of the Year", one of four guest artistes only unmemorable because of the company they kept).
There's a funky four-piece, all the production bells and whistles but it's all Madame Dieter, swallowing the spotlight whole with her impossible eyes, her jagged mouth, her daring original songs and her fabulous ability to turn an audience into cats confronted by cream. Jesus she's good at it!
We're lucky this year to have Meow Meow in town, Amanda Palmer (the artist most like Dieter in stance and talent) too when the grown-ups festival rolls into Perth.
Do not, under any circumstances, miss any of them.

The Blue Room  until Feb 8
Two shows based on ancient mythology, both from companies with strings of hits behind them. One, from the Greeks is another bobbydazzler; the other, from the Vikings, not so much.
Link here to my omnibus review of both shows in Seesaw

The Library at Girl's School until Feb 16.
Bron Batten is a dating machine, Ryan the accountant from the audience made all the right moves, and it all made for a swipe right night.
Link here to my review in Seesaw

Shambles at the Pleasure Garden until Feb 9
Ye Gods –they've done it again! The gang who brought you the triumphant Orpheus last year are back with the other side of the great Greek myth.
Link here to my review in Seesaw

Amateur Hour ★★★★
The Rechabite Sundays Jan 26 – Feb 16
The South African duo Jemma Kahn and Glen Biderman Pam are bringing their wonderful The Epicene Butcher back to the Fringe this year (see below), but their late-night show is far from a throwaway. A deep dark take on talent shows, it’s terribly funny and more than a little savage. It'll be a hard ticket to get.

Franz Kafka’s 1917 short story, A Report to an Kafka’s Ape ★★★★½
Franz Kafka’s 1917 short story, A Report to an Academy, is made for the stage, and the resulting adaptation by Phala O. Phala (who also directs) of Ian Johnston’s translation is both true to the original and revelatory.
The story, a parable of the absorption of the outsider into the dominant culture, and the emptiness it results in, is given dramatic force and a fascinating horror because the outsider of the play is an ape (Tony Bonani Miyambo) who survives and escapes captivity by literally becoming a man. What he gains, though, is not freedom but merely escape, a way out. A free ape becomes a prisoner without chains, but with a great emptiness in his heart.
By all reports, Kafka’s story is an allegory of the “westernization” of Jews in Europe, but Phila and Miyambo have transposed it to the African experience. It’s an uncomfortable experience to see a black man playing an ape (Australian audiences will be drawn inexorably to the vilification of Adam Goodes in this context) but Miyambo’s performance has such dignity and self-respect that the insight and rare beauty of Kafka’s language is a joy to experience.
It’s a marvelous performance, full of technical quality and humour (a mild "beware the front row" warning is appropriate, unless you have fleas) and a must-see opener for the Fringe.

Body Rights ★★★½
Isn’t it a marvel that one of the most eagerly-awaited productions at this year’s Fringe World should be from the WA Youth Theatre Company!
It’s all due, of course, to their spellbinding and brilliantly executed Rest, the winner of the Martin Sims award at last year’s festival.
While Body Rights doesn’t reach the heights of Rest, the strengths and sense of purpose of WAYTCO is on show once again with these four short plays about bodies and the right of young people to determine what happens to and with them.
WAYTCO’s artistic director James Berlyn created and directed three of the pieces: Will the story of a young singer facing an extraordinary decision as his voice starts to break; Adrian’s Soul, a series of one-on-one meetings between the audience and young performers with stories to tell; and ARCO an exploration of the life and thoughts of a person with autism performed by the autistic performer Adam Kelly.
The fourth piece, Boxed In, co-created and directed by Phoebe Sullivan, explores the work young women put into their bodies, and the fears that at least partly drive them.
The plays take place in two rooms at Girl’s School, with the staging, large cast and audience expertly mashalled by stage manager Anastasia Julien-Martial.
Adrian’s Soul is closest in spirit to Rest and ARCO provides the night’s most striking and euphoric moments, but all the pieces, and the whole production, are valuable, finely delivered and well worth your attention.


Talkback ★★★
It's devilishly hard to stage anything supernatural in a tiny black box theatre like The Blue Room, especially during fringe frenzy with no time to set effects, and especially when its a thriller. But director Elise Wilson and her actors (Monica Main a standout) make a decent fist of the story of a radio medium whose past literally comes back to haunt her.
Link here to my review in Seesaw