Jillian is struggling.
For her, there’s a lot going down, but not much going on. She’s got housemates called Bear and Roadkill, a call-in, call-out job as an artists' model and a lifestyle that’s getting to be more about what you take than what you do. There's a bed in the lounge room, because even though all three of them have one of their own, they're often too wasted to get to it.
The bottles are empty, the ashtrays are full, the lines are drawn, no-one ever feels good in the morning, and Roadkill’s eponymous art project is furring up all the sinks.
But there’s more to Jillian than this, and the sudden death of a father she never sees, and the consequent arrival in her life of Christopher, the half-brother she has never known, drives this taut, sexy, domestic thriller by Jessica Craig-Piper. There’s a lot to like about Craig-Piper’s control of the action, both as writer and director, and the plot has a muscular momentum that keeps you looking forward to its next twist.
Bear and Roadkill (her mum and dad know her as Florence) are putative artists scrabbling for the killer concept piece that will win them a precious commission and exhibition space. When Christopher arrives from his country town for his dad’s funeral, they seize on him as a modern Eliza Doolittle, hoping that by changing the country bumpkin Chris into hip, urban “Jack”, and recording the metamorphosis, they’ll win the elusive patronage they seek. Jillian is an unwitting accomplice to their scheme, encouraging Chris to stay, at first because she thinks he needs a taste of city life, later because she starts to need something real in hers. And, inevitably, Jack and Jill tumble down the hill and into each other.
All the performers are terrific. Lawrence Ashford, as Bear, and Zoe Cooper, as Florence aka Roadkill, both convince in roles that are essentially caricatures – Furies in a small room – bringing just enough control to stop them spinning off into farce. Keir Wilkins’s Chris/Jack manages to work between his two, conflicting identities with aplomb, and it’s easy to see what attracts the others to him. But it’s Jillian’s show, and Laura Jayne Henderson brings real star quality to a part that places some tough demands on an actor. If Henderson can’t deliver on Jillian, the show falls apart. Happily, there’s not then slightest chance of that happening with a performer of her allure and quality.
I’ve got some qualms; the story could have had a threat of danger and violence that Craig-Piper doesn’t opt for, choosing instead a climax that needed much more development to shock as it is intended to. But there’s plenty here to work with: I’d be unsurprised and happy to see Jack & Jill re-appear, re-worked and refined, on a larger stage, and I’ve no doubt we’ll be seeing Wilkins, Cooper, Ashford and, especially, Henderson, again.

Another view: Varnya Bromilow's review in The West.
Posted by David Zampatti at 11:14 PM No comments:

Heaven By Storm
Written and performed by The Umbilical Brothers
David Collins and Shane Dundas
Regal Theatre
September 17, 18, 19, 2010
Australian comedians Dave Collins and Shane Dundas have performed as the Umbilical Brothers with great success around the world for two decades. A testament to their popularity is the three packed houses for their latest show, Heaven by Storm, at the 1000-seat Regal Theatre.
Dave and Shane are highly skilled and seasoned physical comics; Collins is a terrific mime and Dundas an outstanding sound effects performer, and together they bring huge energy and invention to their performance.
There’s no doubt the mixed and enthusiastic audience were fans – the reception Dave and Shane got at their first appearance was rock-star stuff – but you couldn’t help but feel the crowd’s energy drifting away even while the visual gags and jokes kept on coming.
So why was it somehow so unsatisfying?
I think it’s because their talent and skill don’t take us anywhere. There’s a narrative of sorts, but it doesn’t grip us; there are characters on stage, but they don’t engage us; there’s even a death or two, but no poignancy. 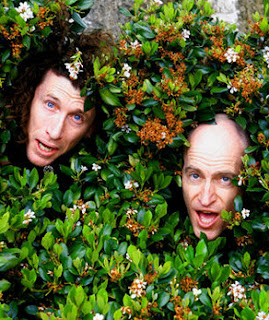 There’s a great deal of comedy about comedy, mime about mime, and sound gags about sound gags. And some of it is very funny — like the extended bathroom scene that ends (kiddies avert your imaginations) with Shane’s genitals being lacerated by a cut-throat razor; and a scene in a nightclub with both characters unable to hear one another over the din.
But none of it offers us the slightest insight.
And it’s long. Very long. Two hours of material probably most often seen in bits on variety shows and YouTube (some of their videos there have millions of hits) really grinds over the distance. And some of the later parts of the show, in particular an interminable Star Wars parody, were just messy and boring.
Many years ago, Spike Milligan performed on this same stage; at one point he did a little mime he introduced as “A man teaching his dog to jump over the Moon”. Milligan looked down at the floor and then, abruptly, pointed skyward and cried “Moon! Moon!”
All of a sudden you knew the dog was small and confused, the Moon was impossibly far away, but the man was utterly convinced the task was both logical and do-able. It remains the funniest, saddest and wisest thing I’ve ever seen on a stage.
The Umbilical Brothers also mime a man and a dog, and a man on the Moon, but for all its skill and technique, Heaven by Storm remained obstinately earthbound.
An edited version  of this review appeared in the West Australian 20.09.10 here.
Posted by David Zampatti at 9:29 AM No comments:

Written and performed by Analisa Bell
Music by Tim Cunniffe and Analisa Bell
Accompanist Tim Cunniffe
with Laura Hopwood and Nicole La Bianca
Downstairs at the Maj
9, 10, 11 September 2010
The Maj is alive with the machinations of carnivorous women this weekend. While Mrs Robinson ensnares her toy boy upstairs, downstairs a local predator has much older prey in her sights.
Analisa Bell, the writer and star of the one-act cabaret Gold-digger, is on familiar ground here, for we all have our opinions about a certain Filipina housemaid turned socialite whose marital adventures in the ’80s and ’90s titillated and scandalised Perth.
Because we all know, or think we know, Ms Bell’s Rose Portalou so well, it’s a tough gig to give a fresh new insight into her life and times in the pastiche of reminiscence, advice to the love-lorn and self-promotion in monologue and song that fills the hour we spend with her.
But the audience’s easy identification with the character served her well, especially early on when opening-night nerves got the better of her for a short time.
Happily, the audience was one of the stars of the show. I’ve got no doubt many cheering her on were fans Ms Bell has picked up in the decade of so since she graduated from WAAPA.
This is a good thing; we need performers with personal followings, and an “up”, boisterous crowd always helps fill the dips and lift the highlights.
The highlights of this show are original songs by Ms Bell and the admirable Tim Cunniffe, who is also her accompanist (and, briefly, the dying iron baron Sam Bancock). While there are unsurprising bowdlerisations of popular tunes like Big Spender and Don’t Cry for Me Argentina, originals like Confrontation (featuring an excoriating cameo by Bancock’s vengeful daughter Nina), the sad and hilarious Pethidine Poker, the uproarious Toothpaste Cha Cha and an instant standard in Enough is Never Enough propel the show and give Ms Bell’s bravura talents fullest scope.
There’s also some delicious choreography by Anna Tsirigotis featuring Laura Hopwood and Nicole La Bianca as a sexy pair of Rose’s poodles/handmaidens. Their foray into the audience, handing out lollipops for ladies to practise on during Rose’s sex education class, was especially delectable.
Gold-digger is still a work in progress (for which the Maj’s Brainbox Project deserves our thanks). I’m not sure if it can travel successfully to places where its subject matter is less known, but with more work, and especially more of its excellent original songs, it well deserves at least another, longer, Perth run.

An edited version of this review appeared in The West Australian 13.09.10 here.
Posted by David Zampatti at 9:18 AM No comments: