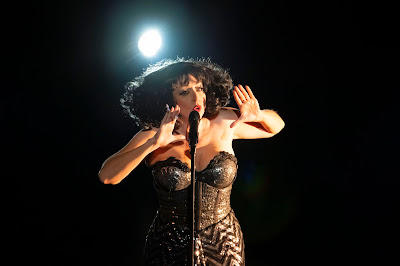 In her Apocalypse Meow, the prima chanteuse Meow Meow describes herself as “a showgirl of gargantuan proportions”.

Never was a truer word spoken, but, as always with Mme Meow, it’s necessary to peel away her layers of intent; of course there’s the sheer presence of her, the big hair, the phenomenal décolletage, the lips, the eyes, the Rockette pins.

Then there’s her stance; hands on hips, all challenge and control – control, that is, until the lights, or the smoke machine don’t work, the flowers aren’t thrown, it all goes wrong – “I suppose I’ll have to do this myself” she snarls, a pussycat becoming a very pissed off tigress.

Its all an act – no, it's The Act – and a brilliant, insurrectionary one, and she injects snatches of it throughout her PICF show.
But for the most part she stripped the tomfoolery away and concentrated on the songs, curated with her usual immaculate taste and subversive purpose, from Laurie Anderson’s 'The Dream Before' (“history is an angel being blown back into the future”) to her mate Amanda Palmer’s murderous 'Miss Me', from Patti Griffin’s tender, lovely 'Kite Song' to the Brecht/Weill canonical 'Pirate Jenny' and 'Surabaya Johnny', but also Brecht and Hanns Eisler’s hauntingly prescient 'Deutsches Miserere'.

Alone but for the immaculate accompaniment of Mark Jones (piano) and Dan Witton (bass), Meow Meow went much of the way to granting me a wish I made in a review a decade ago: “There are times when she should trust the songs and her singing of them instead of interrupting herself with comedy. I’d love her to just sing to me.”

On the night of Meow Meow the foyers of the Maj were abuzz with praise of Gill Hicks’s Still Alive (and Kicking), so, with some gentle prodding from PICF’s indefatigable Ali Welburn, I was back on Saturday afternoon for her show.

Why had I not always planned to see it? Hicks was a victim of the July 2005 London bombings, and lost both her legs in the explosion on board the train she was traveling in. I must confess this tragic story didn’t sound like the makings of a fun hour of cabaret.

How wrong can you be!

Still Alive (and Kicking) is, instead, a quietly glorious story, completely free of self-pity or bitterness, beautifully told and shot through with humour.

The image of Hicks being rushed to hospital without any sign of life for 30 minutes other than that she is talking non-stop, or insisting on going to the hospital morgue to say goodbye to her legs, are drilled into my memory.

There are images and characters just as human and memorable: Adrian, the man she never knew who saved her life as he lost his by being between her and the bomb blast; Matt, “the geezer” who guided her through her prosthetic rehab (“I can’t stop you from falling, but I can help you get up”); waving her prosthetic leg out the taxi window as she finally left hospital.

And there are songs, performed with a remarkable duo, Dylan Paul on double bass and Julian Ferraretto on violin and, or all things, saw.
Among her many achievements, Hicks is a stylish and engaging jazz singer, and the smooth arrangements of 'Stayin’ Alive' (accompanied by aforementioned saw), 'Summertime', 'Bye Bye Blackbird' and 'I’m Feeling Good' gave the standards a musical freshness as well as an urgent dimension.

And, as she says, “being alive is a damn good thing to have whilst you have it.”

There are obvious joys in festival galas, and hidden ones too.

If you come to them cold, you get a snapshot of the highlights of the programme you didn’t see.

So, if that’s you, you got lucky, with festival director Michael Griffith’s snappy opening ('Another Opening, Another Show'), the esteemed Noongar artists Gina Williams and Guy Ghouse ('Moon River' – in Noongar and sing-a-long English – and the willy-wagtail song 'Djidi Dgidi') and double-barrelled showstoppers from the festival's headliners Paul Capsis and Meow Meow.

But if, like me, you’d seen many of the shows in the festival, there were other delights:

Libby Hammer and Ali Bodycoat were all wit and breeze in their festival hit Over the Rainbow, but whack them on the big Maj stage with a full band and they had the crowd roaring to their Kylie Minogue mash up and a barnstorming take on the legendary Streisand/Garland medley, 'Get Happy/Happy Days are Here Again'.

I was critical of Brigitte Hauser’s Maria, Marlene and Me that got bogged down in a clunky narrative which, I thought, threw her performance off kilter, but, at the gala and back in her natural environment, and with Rossini’s 'Una Voe Poco Fas' to work on, she really shone, letting both her pipes and physical comedy chops rip. More of the same, Brigitte!

While Gill Hicks was an impressive interpreter of the standard numbers in her Still Alive (and Kicking) earlier in the day, her one-song stand at the gala, 'Stayin’ Alive' went to another height on the big stage. Even leaving aside her extrordinary story she’s a compelling, complete artist.

And that was that. The second Perth International Cabaret Festival took itself downstairs for a few more songs and quite a few more drinks, the ghost light was switched on and all the songs, and all the laughter and applause were just echoes to add to the grand old theatre.

PICF is a great addition to Perth’s popular arts (the good news is that it’s back next year, and extended from two to three weeks), and, given the tough environment it was born into, everyone involved deserves a standing ovation.

Posted by David Zampatti at 11:41 AM No comments:

Dogs and humans have been at it for somewhere between twenty and forty thousand years, and you might imagine it’s worked out okay, all in all.
I tell myself that the gooey eyed look our wonderdog Lachie gives me at 6:30am and 5:30pm every day is an expression of self-determined affection rather than his imposed hunger time-clock ringing in his head, or that his instantly alert reaction to the mere mention of the word “Yokine” is his freely expressed anticipation of a mutually-agreed morning walk.
It doesn’t occur to me that we were in fact keeping him prisoner, unilaterally decided when he’d eat, sleep, run, wee, wear a collar and lead or even bark.
But that’s what “attachment style” – a handle I had never encountered before – is about, and it’s the grist to the mill of Morgan Owen’s erudite, papercut black comedy Sit! (Or I’ll Make You Sit) at the Blue Room.
Blair (Owen) is breaking up with her live-in boyfriend Dom (Ben Sutton). She doesn’t mince words, and neither does she leave Dom any wriggle room.
Ainsley (Ebony McGuire) is a successful public prosecutor; out on a first date with a woman she met on-line. Their conversation revolves around worth, honesty, control. Ainsley doesn’t leave her date much wriggle room either.
These episodes are the bookends, two years apart, of Owen’s story, most of which takes place at and around a dinner party where Ainsley and Blair, now, and then, a couple, have Dom around, ostensibly so Ainsley can meet him, but, in fact for many other, deeper reasons. All of which are best left for the audience to discover.
Oh, there’s a dog as well. Chekhov (Alicia Osyka), obsessed with and fiercely protective of, Ainslie, snarlingly trying to ward off the threat posed by Blair and Dom.
Sure, there’s plenty here to unpick, deconstruct, position and ponder, but if that’s what you want, there are plenty of pop-psych articles and postgrad thesis you can refer to.
Don’t come to a play for them though. And certainly don’t come to this one. Owen’s achievement is in absorbing its meaning and purpose into the meat of the play without foregrounding it; she covers her tracks with comedy and dramatic intrigue (it’s remarkable that this is her first play). She claims in her notes that she’s ‘sweetened (the play) by laughter’, but that’s selling her success here short
Sit! stands on its own two feet as an entertainment; the comedy is sharp, generous and genuine, the plot twists have internal logic and momentum, and there’s a purposeful balance between reality and improbability.
Much credit goes to Izzy McDonald, who is an inspired choice as director. An accomplished playwright herself (Busboy, French Over), McDonald has a expert touch for both the play’s nuances and broad brushstrokes. She and Owen have their material completely under control, and they never miss a beat.
McGuire nails Ainslie, so that how we see her, and what she becomes, fit seamlessly, while Sutton gives Dom a great deal more than the hangdog, rather gormless character we first meet seems to promise.
The W.C. Fields zinger “never work with children and animals” might just as easily be “never work with Alicia Osyka playing animals”. Idiosyncratic and courageous, Osyka could make something of a pet rock; with a critter as charismatic and confronting as Chekhov she’s every kind of scream.
And Owen gives an expert characterization of Blair, zeroing in on her like a tracer bullet. I have no idea the amount of autobiographical detail, or self-reflection, there is in her performance, but you can believe in it absolutely.
As you can the whole production.

It’s a great shame the season was perforce so short; I hope Sit! will be picked up for a return season (perhaps as one of Black Swan’s series of remounted independent productions).
Sit! (or I’ll make You Sit) certainly deserves it.

Posted by David Zampatti at 9:28 AM No comments: