I’m as susceptible as anyone to the lure of awards, ratings, polls and all the other paraphernalia of opinion by which we measure those two imposters, popularity and success.
So, here’s my humble contribution: the Turnstile Award for excellence in theatre in Perth.
In the past year, I reviewed 34 productions for either or, most often, both The West Australian and this blog. It’s not a completely exhaustive list, and I apologise for the absences. I didn't consider cabaret or comedy, or improv theatre, which, by its nature, is impossible to judge on one night’s viewing.
Looking back over the year, the good news is that shows I thought well worth seeing (23) vastly outnumbered those I’d have strongly encouraged you to avoid (six) – and I’m well aware that at least two of those might feature in other people’s “best of” lists.
Read more »
Posted by David Zampatti at 8:40 AM No comments: 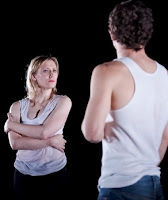 The prodigious British playwright, novelist and artist Philip Ridley divides his output fairly equally between works for children and adults. Ridley’s ability to explore the imaginary worlds of young people, their cruelties, courage and capacity for love is a vital strength of Perth Theatre Company’s Australian premiere production of Tender Napalm.
While this is most decidedly a play for adults (all the usual warnings apply), it has the bravery of youth. Its two, un-named, characters (Joshua Brennan and Ann Houston) inhabit a non-specific place and time and more often than not speak in parables and fantasies. Somehow, through stories of tsunamis and armies of monkeys, we get glimpses of something terrible that has happened to these people that has unhinged them and their relationship.
Link here to the complete review in The West Australian
Posted by David Zampatti at 10:47 AM No comments:

Adapted by Silvia Lehmann and Teresa Izzard
From the short story by Charlotte Perkins Gilman
Directed by Teresa Izzard
Designed by Laura Heffernan
Featuring Jo Morris, Sarah Nelson and Sean Walsh
Blue Room Theatre
Until September 3
Charlotte Perkins Gilman wrote the semi-autobiographical The Yellow Wallpaper in 1890 in California, where she lived with her daughter Katherine after separating from her husband.
While it may not have had the spectacular effect of her aunt Harriet’s Uncle Tom’s Cabin, which Abraham Lincoln credited with bringing on the American Civil War, it was an influential early example of feminist literature.
Writers Silvia Lehmann and Teresa Izzard have given Gilman’s short story a challenging dramatic interpretation with a strong flavour of Ibsen that remains true to the 19th century literary and theatrical sensitivity from which it springs.
Read more »
Posted by David Zampatti at 5:10 PM No comments:

Director Peter Evans
Dramaturg Kate Mulvany
Designer Anna Cordingley
Lighting designer Paul Jackson
Composer Kelly Ryall
Featuring Alex Menglet, Colin Moody, Daniel Frederiksen, Kate Mulvany, Benedict Hardie, James Wardlaw, Gareth Reeves, Keith Agius, Katie-Jean Harding, Rebecca Bower
Heath Ledger Theatre, State Theatre Centre
Until August 20
The soldier-politician Julius Caesar should not be king of Rome. He’s past his prime, deaf in one ear, epileptic, superstitious and sentimental. In any case, Rome doesn’t have a king.
Trouble is, after decades of explosive imperial expansion and a brutal civil war, it could really use one.
A hard core of the Roman elite still clings to the old republican political model, but out on the street that’s a tired and outdated concept. It’s an untenable mix, and that can only mean blood.
Link here to the complete review in The West Australian

Posted by David Zampatti at 7:31 AM No comments: 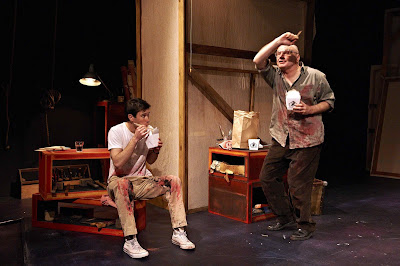 Biographical theatre needs to be approached with caution. It’s a brave writer who tries to draw drama from a real life, especially a famous one, and a brave actor who attempts to represent that life.
The currency of great theatre is universal human truth, not the facts of an actual life. The more we know about someone, the more difficult it becomes for a writer and actor to convince us that the person on the stage is who he claims to be.
It’s the polar opposite of the willing suspension of disbelief - the necessary engagement of belief - and it’s essential for biographical theatre to succeed.
Which is exactly what Red, John Logan’s terrific exploration of the Latvian-American artist Mark Rothko (1903–1970), does.
Red is a must-see production, and another feather in the cap for the independently funded Onward Production. The play comes to Perth within a couple of years of its London debut and only a year after it dominated the Tony Awards. I hope it attracts an audience large enough to encourage the company to bring more international work of this quality to Perth theatres.
Link here  to the complete review in The West Australian.
For a broader look at Rothko, his legacy and the issues raised by the play, link here to William Boyd’s article in The Guardian.
Posted by David Zampatti at 1:41 PM No comments:

Theatre: You've Got That Thing

Music and Lyrics by Cole Porter 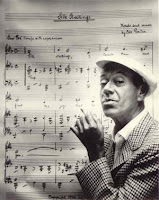 A biographical pastiche of the songs and life of Cole Porter sounds easier to do than it is, and it's to the great credit of You’ve Got That Thing’s young writers Izaak Lim and Nick Maclaine that they have neatly side-step the traps in their path to deliver an elegant and surprisingly substantial entertainment.
The first wise decision they made was to keep Porter off stage. We learn about him through three of the people in his life; his wife Linda, his favourite performer Ethel Merman and an apocryphal boyfriend Edward, modelled perhaps on his long-time friend Ray Kelly, to whose children Porter left half his royalties.
It’s a nice touch, and a clever one. By not having to represent Porter himself, Lim and Maclaine are able to speculate and invent without the weight of verisimilitude demanded by baleful old pedants like me; so, for example, the famously convenient relationship between the Porters is drawn out in exchanges between Linda and Edward with a freedom that would have been awkward and artificial if we heard it from the couple themselves.
Their next winning decision was to enlist Michael Loney to shape the show. The lightly framed agility of Porter’s writing, and the comic timing that his music brings to even his more serious subjects, is meat and drink for Loney the actor, and as director he imparts that stagecraft to his cast to the show’s great benefit.
Read more »
Posted by David Zampatti at 1:43 PM No comments:

Nancye Hayes and Reg Livermore are steeped in the traditions of the British and American musical stages, and both are masters of the Australian theatrical idiom that is at once derived from, and subverts, them.
Hayes is a gloriously precise and funny performer, and Livermore’s intelligence and emotional power make him a formidable stage presence. They both know exactly where an audience’s buttons are hidden, and just as exactly how to push them.
So, to the extent that Turns is, as its title suggests, a star turn for two genuine stars, it’s a success.
Link here for the complete review in The West Australian

Posted by David Zampatti at 10:39 AM No comments:

We should be grateful to have had a couple of visits in recent years from Leonard Cohen and Jimmy Webb, as well as drop-ins by Paul Simon, Brian Wilson and Van Dyke Parks. It's sad, though, that the finest of all these legendary contemporary North American songwriters, Randy Newman, has never made it to Perth, a city he'd find particularly amusing.
Ah well; Perth's loss is Brisbane, Melbourne and, this weekend, Sydney's gain. Here's a terrific discussion with Radio National's perceptive Andrew Ford that includes live performances of Birmingham, Marie and the glorious, heartbreaking Cowboy, and a few compensatory clips of the boss (for a while) in action:


Read more »
Posted by David Zampatti at 5:33 PM No comments: