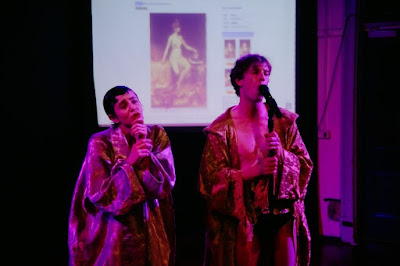 I’ve seen two versions of, or at least in a trajectory around, Oscar Wilde’s Salome. The first (showing my age again) was Lindsay Kemp’s hallucinogenic, slow-motion marvel at the London Roundhouse in 1977 that made it, and him, icons of their age.
The second, far more prolix and topical than Kemp’s, is a Summer Nights production at the Blue Room. (Those of you who’ve been feeling there’s something missing from this year’s Fringe World, that’s what it is.)
The dancer Olivia Hendry and the polyalternatist Andrew Sutherland have wrapped themselves in Joe Lui’s dense son et lumiere, Declan Macphail’s Siamese twin-set of an Aubrey Beardsley gown, and Lui and Briannah Davis’s minutely reactive direction. Then, layer by layer of exquisite, excruciating pain, they dance their seven veils for us.
There’s a consumptive nostalgia for illness embroidered into those veils, transformed into an aesthetic beauty, like Rosetti’s Beata Beatrix.
And they are beautiful; Hendry, pale, with breasts exposed like Beardsley’s Salome, Sutherland reptilian, microphone and stand raised aloft like photographs of a Jim Morrison.
Sutherland is declamatory, much in the way of Allen Ginsberg, and he takes us on a nightmare journey through the underworlds of the diseases of our time, HIV/AIDS, anorexia and, now, COVID; Hendry is silent, orbiting, covering and uncovering in the material that binds them both, unravelling away and spinning back to him.
It’s an intensely personal double-act, the dancer and the poet, drawn from experience, repetitive and insistent.
Finally, quite unexpectedly, when all the veils have been removed, Sutherland becoming a dancer, Hendry an orator, in a pas de deux of joys and sorrows.
It reminds you – this is a show that incubates memory – of Leonard Cohen’s “And when we fell together/ All our flesh was like a veil”.
There are no veils of secrecy in this Salome, though it is complex, both in its messages and its tempo, and might be impenetrable if you hit its atmosphere at the wrong angle.
But, like a dance, or a poem, or a deathbed, it has an honesty that can only arise in places where there’s nothing else left to lose.

Salome δ is at the Blue Room until Feb 5.

Posted by David Zampatti at 8:15 AM