Tim Minchin knows that orchestral and rock music are uncomfortable companions; one’s a speedboat, the other an ocean liner, and it’s hard for them to travel in convoy without the former being swamped in the wake of the latter. 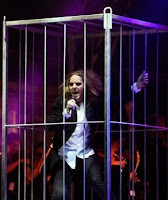 There were times during his Kings Park concert with the West Australian Symphony Orchestra last Friday when the material was at risk of foundering in muddy waves of strings.
But he’s got the weapons to overcome these problems, and he uses them to great effect during over two hours of favourite and new songs, punctuated by some tight stand-up routines and the occasional obligatory Minchin diatribe.
All in all, a happy homecoming for the Perth boy with everything except shoes!
Read the complete review in The West Australian here
Posted by David Zampatti at 11:59 AM